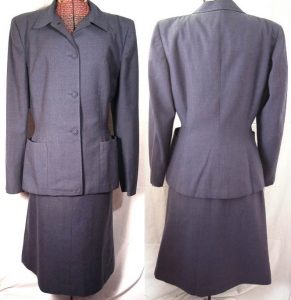 American designers came to the forefront in the fashion world with the closing of the Parisian fashion houses, boosting such designers as Clare Potter, Claire McCardell and Carolyn Schnurer in sportswear.

Very fashionable dresses were designed with sweetheart necklines, side zippers and drapery that flowed from side to side. Casual wear consisted of pleated pants, print cotton dresses in patriotic motifs, polka dots, checks and abstract designs in bold colors.

Suits and dresses were worn with platform-soled shoes. Cork wedge was used in place of leather and steel during the war. Suede and fabric platform sandals and mules were fashionable and in Italy, bakelite was used for soles and heels.

The outrageous hats of the previous decade were replaced with turbans, crowned hats, hand knitted caps, and calots worn at the back of the head. Kerchiefs and veils tied under the chin were a chic trend, with hats becoming frivolous again after the war with veiled turbans adorned with fruits and flowers. Hairstyles were rolled or pageboys.

In 1947 Christian Dior’s “New Look” was a totally different design with unpadded soft round shoulders, padded hips and full skirts with pleating at the waist, calf-length skirts with crinolines in rich feminine fabrics. Hats were very small and designed to coordinate with specific dresses.

Men’s clothing also had fabric and design restrictions. No cuffs, pleats or overlapping waistbands. Vests were limited, and the two-piece suit replaced the traditional 3 pieces. Backless vests were used for eveningwear, with narrower trousers and shorter jackets made with rayon, rayon blends and flannel. Battle jackets were popular casual wear.

The “Zoot” suit made a brief appearance, but was considered a waste of too much fabric. It was styled with oversized coats, big shoulders, slash pockets, full knees, cuffs, trousers hiked up with suspenders and oversized bow ties. Does this look similar to what the boys are wearing today?

Ties were the mainstay of the forties with patriotic colors during the war. Hand painted designs and photo ties in vivid colors inspired by art deco. After the war luxurious silk ties were manufactured once again.

(Missed Part I? Read it here…)