Raymond Loewy came to this country from France, and with a young family to support, started out as a window dresser for many of the top stores in New York City. From that point he started illustrating clothing, and many of his fashions made top magazines such as Vogue.

You have seen his designs, many of which are still present today such as the Shell logo. This design became so well recognized that Shell eventually removed its name from the logo. Another very recognizable design is the Lucky Strike packaging along with the Greyhound Bus, S-1 locomotive, Exxon logo, Coca-Cola bottle and many household utensils such as toasters and the Coldspot refrigerator that he designed for Sears Roebuck. He also designed the interior of Air Force One for President Kennedy, and was the designer for the interiors of Saturn I and Saturn V and Skylab. Things we all take for granted today.

Of course, my very favorite design was the Studebaker Avanti. This four-seater sports coupe went from design to production in 18 months and was meant to compete with the Corvette and to help save a dying auto producer. The design was way ahead of anything the other producers were doing, but the price was a little more than the average person’s wages could support, and was only produced for two years 1963 and 1964 under the Studebaker name.

So the next time you pick up a fashion magazine, stop and think that just maybe that illustrator may have a wonderful career designing other things that make our life easier and beautiful. 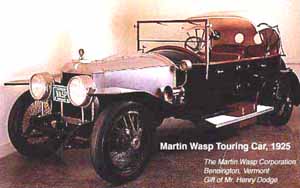 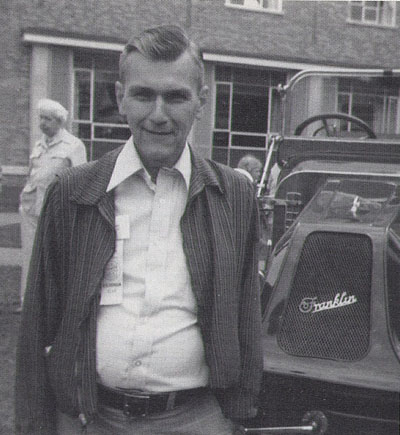 You may have noticed that rewards are not always immediately following performance just as punishments don’t necessarily happen right after crimes. It would be nice, however, to think that in the long run we all got at least what we deserve. Some of our “Big E” awards are a little late in coming but this month’s award is undisputedly deserved.

Lloyd Perkins Davis gets a BIG E for his 50 years with the VAE. Years ago some wag said that the L.P. in Lloyd P. Davis was for “long playing” (it might have been Bob Jones). Lloyd has been long playing, in its best sense, with our car club.

His own interests are wide and included in his personal collection are a Chalmers Detroit, Franklin, Ford T, a Packard and a very unusual Davis car. Like many members he probably also has a secret stash hidden away somewhere. As a charter member Lloyd has had a long and significant career with us.

He has held office, organized meets, helped us plan and has brought us help and experiences from some of his other affiliations: The Franklin Club (where he is an active and respected member) and the AUHV (the Automobilists of the Upper Hudson Valley). The latter were a lot of help to the VAE in its early years and recently we have tried to involve them in our activities once again.

It was Lloyd that really helped got us going with our first “film night” in years last February and it was from his personal collection of old film that we got another look at Oliver and Hardy and other assorted mechanical mayhem from the silent film era. Many an early VAE meet came out of Lloyd’s archives of film and many a member came and stayed with the VAE because of his interests and example.

We don’t see Lloyd at as many meets as we used to… Rutland is quite a commute. But our older members know that Lloyd is just a call away for help and advice. We know that he will turn up, often a little late because of “chores”. We recommend that newer members get to know Lloyd. No one has more old car “enthusiasm” and Lloyd’s sense of humor makes any conversation a lot of fun.

Just ask him about the dog, the flat tire and the jack; all in greater Hardwick some years back… an adventure with Lloyd Davis Commentary. Lloyd could also tell you all about the Bomoseen Auto Museum, now closed and gone, as he was its advisor. Or some Glidden tours… or almost anything else.

Thanks Lloyd for our first 50 years of help and friendship.

We’re looking for many more. Here is a great BIG E for you.