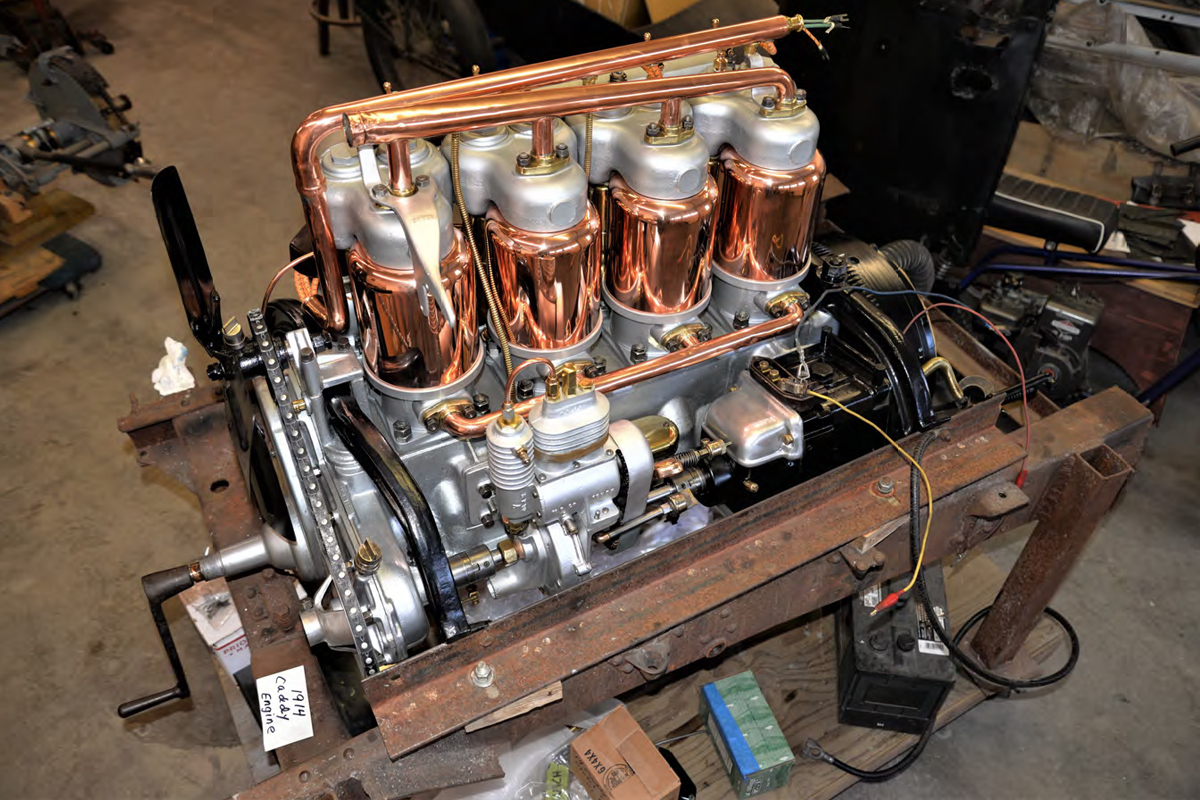 “It is way too nice to put in my car, I am going to make a coffee table out of it…..” The words of engine owner, Bill Fagan, after seeing Fred Gonet’s beautiful work. Fred’s business is G&G Restoration of Proctorsville, Vermont. Many years are needed to reach this level of restoration ability and Fred has them.

The engine is an in-line, Vertical L-head engine with cast iron cylinders and copper water jackets. Displacement is 366 cu. inches and produces 40 to 50 brake HP. The publication also notes that 1914 was the last 4-cylinder engine that Cadillac produced in the next 67 years. The company went to the 70 HP V-8 in 1915.

Bill Fagan’s plan is to take the car to Fred Gonet’s Proctorsville shop in March to have the engine installed. Here is Bill’s “barn find” story…

A friend of mine in NH has the exact same Phaeton, being the rarer Sport model 4 passenger body, as opposed to the larger 5 passenger body with 2 jump seats in the back.

The story is, my friend was working with the Boy Scouts on a Soap Box Derby with another guy, got to talking about old cars and the guy said his father died and left him a very low mileage ‘14 Cadillac. It was in the barn and had not run since the mid ‘50’s when they tried to start it and burned up the rear main bearing. The father had bought the car in the late ‘30’s from the original owner in Maine and drove it all through the ‘40’s until the early ‘50’s when he got involved in Sports Cars, so the Caddy was parked in the barn and there it languished until 2006 when my friend struck a deal for it and some parts.

On a Brass Era Frostbite Tour in Mass. a few days later, my friend told me he had just run across this “barn find” ‘14 Caddy, and was I interested? Needless to say I was and drove to his place in NH the day after the tour and made the deal. Because the car sat in the barn with a damp floor, the fenders, splash aprons and wheel rims were quite rusty and had to be repainted. The body and upholstery are original and in excellent condition. I’ve gone through the running gear and the frame, painted them and the wheels and Nickel plated all the bright work.

Ten years ago I had pulled the engine, dismantled it and cleaned all the parts and painted where needed. After this 10 year hiatus, I brought everything to Fred and he started to work his magic, as I tried to remember what I had and had not done! The heads had to be removed from the jugs with a special high torque tool my friend made up and Fred modified. New valves and guides had to be made down in Mass. and the heads remachined. Fred pulled the copper jackets off the jugs, pounded out the dents and buffed them. Its a very delicate operation. 100 years of rust and sediment gets trapped in there and is the cause for these copper clad jugs to overheat, a notorious Cadillac problem.

Most owners are too nervous to try and pull the copper jackets off. Fred made up a jig to hold the iron ring that holds the copper jackets in place. The ring has to be heated up with a torch and slid down over the copper jacket. You have only one chance to get it right before it cools and contacts around the base of the copper. You will inevitably damage the copper jack-et trying to get it back off if you mess up! I had gotten new Arias Aluminum Pistons made 10 years ago, but got side tracked on other projects, so everything had come to a stand still. At this juncture, I am waiting for new tires and tubes back ordered from Coker, then I can get the car to Fred and hopefully get it on the road this Summer.

Fred Gonet told about the other items that he needed to do, to get the engine ‘sorted’. Part of the engine was together but he needed to be sure all tolerances were correct, so everything was disassembled. Once the copper jackets were removed, he used heat to anneal the metal and then hammered out the dents, then smoothed and polished them to what you see in the pictures.

The old coil was unusable so he re-engineered a motorcycle coil to fit into the factory assembly.

New plug wire ends were built to factory specs, the distributor was completely gone-through, all lower end bearings were re-shimmed and the timing was setup. Interestingly, the oil pan is built with two compartments but only one has a drain plug for removing the old oil. With Fred’s “modern touch” the ’14 engine now has two drain plugs and also oil-level plugs installed for both compartments.

Surprising to many is the size of the cone-clutch. It can be seen in the picture to the left. The disc that you can see has an angled edge (cone shape) with a matching disc/cone outside of it. As the two cones are pressed together, the material in-between allows smooth vehicle movement. Originally leather was used, in this case a Kevlar material is used.

Some, have heard how drivers of these old cars have felt a weird jump while driving down the highway. When they look back “there is a snake in the middle of the road!”

The “snake” is the leather material that was kicked out by an unhappy automobile.

Many new car dealers offer “free state inspections” for life when you purchase a vehicle from them.

Why would car dealerships offer this? The answer is to get you into the service department after the sale of the vehicle. If you were to have the dealership perform scheduled maintenance and repairs, they would make money selling you these services. I have experienced several situations where the dealership uses the “free inspection” to pressure the consumer into consenting to repairs and services that are either not needed or should be covered by the new car warranty.

I have friends and co-workers who have shared stories of dealerships pressuring them in to performing services, or expensive repairs that may not be necessary. Recently, I brought a one-year old vehicle with 8,000 miles to the dealership for a “free” State inspection. The brake pads and/or calipers had seized, causing the inside of the rotors to not contact the inner brake pads. The dealership flunked the car but said for just less than $500 they could free up the calipers and pads and turn the rotors. I asked why a one-year old vehicle with barely 8,000 miles would need this work, and why it would not be covered by warranty. They stated the warranty only covers parts that need to be replaced, and they would not be replacing any parts. I asked for the keys back and brought the vehicle to an independent shop. The independent shop also flunked it for the same reason, in addition to finding worn out bushings in the rear suspension. They quoted a price of $850 to make the one-year old vehicle, with barely 8,000 miles covered by the factory warranty inspectable. The original dealer then sent out a bill for $45 for the “free” inspection. Apparently, if the vehicle fails the “free” inspection, and you opt not to pay them to fix it, they charge you $45 for the failed inspection. Remember, If the dealership performs a warranty repair, they bill the manufacturer a flat shop rate. The rate a consumer pays for the same repair is significantly more than the flat-rate the manufacturer pays. The dealership would make more money convincing the consumer to pay to make the repair vs. the manufacturer. Why do dealerships do this? Because it works, and they make a lot of money with this business model.

My advice is this:

IF you choose to exercise the “free inspection”, read your owner’s manual and warranty carefully before you go to the appointment. IF the dealer recommends any services that are not mentioned in the schedule of maintenance table at the back of the owner’s manual, do not consent to the services. If they push back, point out the factory recommended service schedule in the back of the owner’s manual. If they say service is necessary for an inspection, read the warranty carefully, and point out to them what is covered, and what is not. Remember, dealerships have the “free inspection” to make money on service. Be careful, and do not fall for high pressure tactics to have the dealership perform services that are not necessary.

I love flowers! I am addicted to gardening! There. I’ve admitted it for all the world to know. It’s my #1 passion (well, besides Donald and Millie, hubby and cat respectively, though some days I’m not sure who outranks whom). So this time of year my mind starts wandering……..

I’ll let you all in on a little secret. I purchase most of my annuals and perennials at Claussen’s in Colchester. I love that garden center. Because my passion/obsession can get to be a little expensive, I’ve found a great way to save 20% +. I’ll explain how — though please don’t tell anyone else!

Claussen’s a number of times a year has a 20% off gift card sale, so I go in and, let’s say, buy a $50 gift card, and it only costs me $40. Bingo! Then when spring and summer roll around, just about every week, they have a different perennial Special of the Week: Buy one perennial and get the second free! Well, you don’t have to twist my arm. So I’ll go in and buy maybe two perennial Montauk Daisy* plants (my new favorite) but only have to pay for one — with my gift card, of course. Boy, I’m way ahead now. Then of course Claussen’s has “annual” specials, i.e., buy four geraniums, get two free; buy one pack of marigolds, get a second ½ price.

Now I digress: Late last fall I finished putting my flower beds to winter sleep, pruned and trimmed bushes, cleaned out bird houses, and generally put the outside to rights for the long winter. I’ve made it through Thanksgiving, Christmas, New Year’s, a trip out west with my hubby for a month, and now I am planning my first foray, into the gardens, once the shovel can make its way into the thawed ground.

I have big plans this year. I’ve already removed five very ugly bushes that were along the front porch. I still have seven left to go. First I will dig two circles around each bush with my favorite Christmas present from last year, my sawtooth shovel, and then I’ll hop on my trusty outdoor toy, John Deere, hook up a big, heavy, long chain with giant hooks, snake them around each of those dang bushes, gun the JD, and not-so-gently riiip!! those suckers out of the ground one by one. To feel those roots give up the ghost is very satisfying — “he-he.”

After that I’ll be placing two layers of edging stones along the 24-foot length of the porch, backfilling with good soil and compost, and then, my most favorite part of all, heading to Claussen’s where I’ll purchase a dozen perennials that will be spread over the length of my newest garden. I won’t be using any filler plants or ground cover plants; just mulch. Oh, how I can’t wait to get my hands in good old Mother Earth!

Gardening is my obsession, my passion, my joy, my happiness. What’s yours? What brings you much happiness in the spring time?

*Montauk Daisies, pictured right, are a herbaceous perennial flower that forms a mounded clump. In this area, they bloom late summer to frost. While other flowers have died off, these gorgeous plants are in full bloom, and on sunny days you can find the last of the bees collecting nectar and pollen.