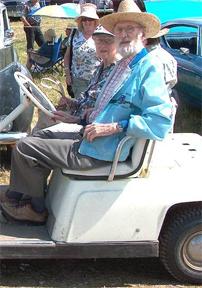 RODERICK CHARLES RICE BURLINGTON – Roderick Charles Rice, age 85, died peace-fully in the hands of the Lord on Sept. 14, 2009, at home with his loving family by his side. He was born at Mary Fletcher Hospital in Burlington in 1924, attended Burlington public schools and graduated from Burlington High School in 1942. He joined the Army Air Corps soon after graduation and be-came a B24 pilot. After graduating from UVM in 1951, he be-gan his career at International Harvester Trucks where he made many lifetime friends and acquaintances. Infatuated with any-thing mechanical, his passion for cars blossomed by the age of 8, and in his late teens he rebuilt a Model T Ford in the basement of the First United Methodist parsonage.

He later became a founding member of the Vermont Automobile Enthusiasts and remained an active member until his death. Interested in hiking from an early age, he joined the Green Mountain Club in the 1930s and became one of the original caretakers of Butler, Taylor and Bolton lodges. Combining his loves of family, hik-ing and antique cars, Rod led his family on many adventures, typified by a 1964 climb up Mt. Mansfield’s Toll Road in a 1922 Cadillac to sleep under the shooting stars. On his 80th birthday he rode his beloved 1933 Harley Davidson which he had acquired during his military service. Ever the ‘gentle man’ his concern was always for others.

His willingness to help friends, neighbors and family exemplified his true nature and his good heart. Through his generous spirit, patience, and help-fulness he taught those around him the true nature of “giving.” Rod married Emily Ellen Flanagan in 1947. He was prede-ceased by his brother Elliott in 1928, and a son Roderick Jr. in 2000. Survivors include his beloved Emily; son David and wife Anne of South Burlington; son Rick and wife Lisa McCullough of Shelburne; grandchildren, Allison, Nathan, Heather, Dean and Elliott; and his loyal 23-1/2 year old feline companion, Nosey. In lieu of flowers donations may be made to the Jericho Congregational Church, P.O. Box 1022, Jericho Center, VT 05465 or the Green Mountain Club, 4711 Waterbury-Stowe Rd., Waterbury Center, VT 05677. The family wishes to thank all the compassionate caregivers from VNA, Hospice and Home Instead Senior Care. Funeral services will be held at 11 a.m. on Thursday, Sept. 17, in the Jericho Congregational Church on the green in Jericho Center.