I didn’t know the man, he died in 2007 at the age of 79, but after talking to many of his friends I wish I had. The first Wheel Tracks newsletter in May 1953 contained a three page written by Pevy about a trip with his friend to Pennsylvania in his Model T. A good beginning to get to know Pevy. Here are the first two paragraphs: 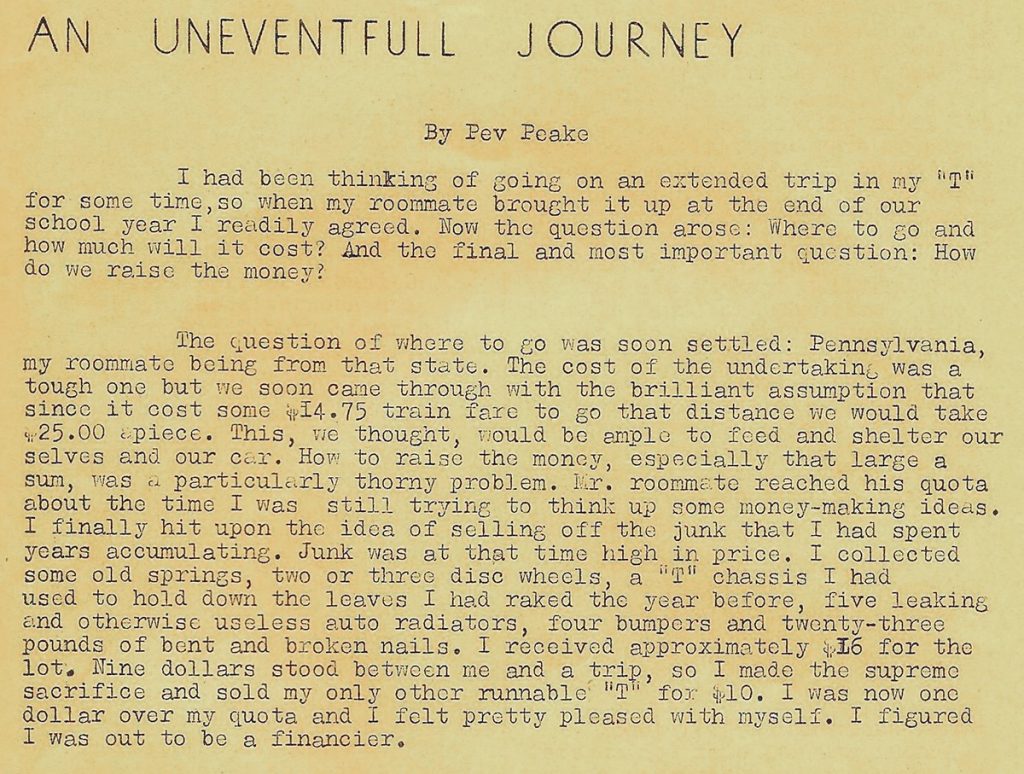 The fun part of this project was listening to the ’Pevy stories’ from his friends, some I can not print. Doris Bailey told about the day that Pevy and his friend John Keefer was on a trip to Boston in his Model T (from Bristol no less). While driving through a village they spotted a neat pile of leaves on someone’s lawn and decided to drive the ‘T’ through them. The leaves went flying everywhere. On their way back the same leaves were again raked into a neat pile but this time an anvil had been hidden in them. Yes, you guessed it….they drove through the leaves the second time and the anvil did a job on the car while someone was watching through a curtain slit in the house. The car made it home but you could tell the ‘T’ has issues. Lloyd Davis tells about the day Pevy sold his 46 Caddy to Adrian West but found he had mistakenly agreed to sell it for way less than its value. While Pevy drove the Caddy to it’s new home with Adrian following he was still mulling over his mistake taking many detours on the way. Adrian finally took the lead and the Caddy made it to Morrisville. Bill Sander has the car today, a picture of it can be seen on page 16. Lloyd also tells about the used VW Beetle that was delivered to Pevy back when the car was first introduced to this country. It had stayed in the driveway for a number of days before Pevy figured out how to get it into reverse. I am told Pevy had quite an Irish temper. He had been known to ‘beat-up’ a car when it refused to start. In one mid-winter story the car actually started after its tires and hood got a thrashing. VAE member Joe Kailin is originally from the New York City area. Joe tells about the day he heard a recent story about some New Yorker running Pevy and his Model T off the road. Meeting Pevy for the first time, Joe pretended he was the New Yorker but seeing the Irish temper come across Pevy’s face Joe immediately told Pevy he was joking. Later when the two became good friends, Joe invited Pevy to go with him to visit family in the city. New York City found out what real snoring was that first night Pevy went to sleep!

Pevy was a serviceman for the Oldsmobile dealer in Middlebury for some time and spent many years working as a quality control person at GE in Burlington. Pevy was a very intelligent man and had an encyclopedic memory. All whom I talked with remembers his ability to recall the smallest details of anything including cars. 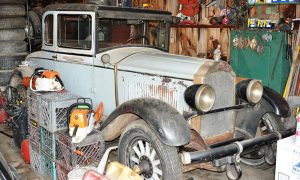 Pevy owned a 28 Willys Knight and in 1957 he entered the car in the first Stowe Antique and Classic Car Show. The main reason, I am told, that he bought the car was because it had a ‘hot water heater’ and that was good for the Vermont winters. The car also has a 9 quart oil sump because it has a sleeve valve type engine and Pevy found out all that oil gets thick when it is cold out and starting the engine is a task. He could be heard a mile away when the car would not start. The car was passed around and traded among VAE members over the years and today sits in a barn in northern Vermont. Pevy paid $35.00 for the car in 1953 when he bought it from someone in New York, the present owner paid Pevy $12.00 in the early 60s for it. VAE names like Chuck Hill, George Farr, Gael Boardman and Lloyd Davis come up as either owning or ‘using the car a lot’. 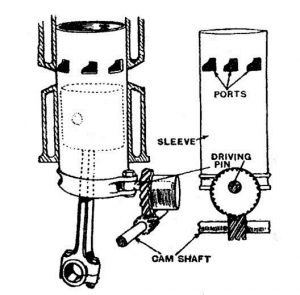 The valve sleeve engine was invented by Charles Knight in 1905 with smaller engines still using the technology today. Mr. Knight was annoyed by the noise the ‘puppet valve’ type engine made and developed this very quiet engine. The 6 cylinder engine has a ‘vacuum operated oil rectifier’ that recovers the oil before it gets burned and goes out the tail-pipe. One VAE member remembers a picture of a Willys Knight with a caption asking how one would know if the car was running or not. The hint in the picture was the plume of smoke that billowed from the rear of the car. The rectifier worked great but would get plugged easily thus causing the blue smoke. The big question I have now is….will I be seeing this 1928 Willys Knight in any future Stowe Car Show? I hope I do.