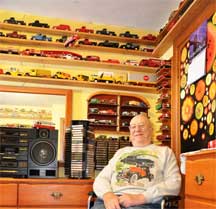 If you remember, Wheel Tracks had a really nice story about a fire truck from St. Albans, VT that was turned into a ‘Speedster’ back in the February issue. A question was simply asked at the end about the car in the picture that was “the fire chief’s car. “What make and year is the car?”

Well, did that go places! There were a number of calls from folks who claimed the car was a 27 Buick, just like a few of the guesses that had come in earlier.
Then a call came in from this gent pictured to the right, Alden Chapman of South Barre. Alden is the famous VAE member who has a lifetime collection of over 2000 diecast cars. You might remember a short article about his collection in the August 2011 issue of Wheel Tracks. He confirmed the chief’s car was a 26 Buick Roadster and told me a little about it being re-stored some 43 years ago. His last comment was the Buick was stored in a garage and he knew where!

The Buick is owned today by Sue and Greg Sabens and the “garage” was just up the road from Alden’s home. Greg’s Dad, Dell, had purchased it from Charlie Arnholm on August 12th 1965, Charlie was a longtime VAE member and club president in 1961. A meeting was set up and Jim Sears and I went South to find this garage. You can see the garage on the front page with the Buick looking out from the shadows. As it turned out, the gar-age is at the home of Dell’s wife, Helen, who was the person who did all the leather and fabric work for the Buick restoration. The family lost Dell some fifteen years ago, but it was easy for us to know a little about him from seeing his part of the loving restoration on this car. Charlie Arnholm was known for his great abilities with the pin-striping brush and the Buick carries some of his work. Charlie Arnholm was also the second
owner of the Boardman/Teachout Speedster.

Greg told us with pride how his Dad won the Governor’s Award at the 1970 Stowe Car Show and how Governor Davis presented the award to his father, Dell.

Greg and Sue became the new owners in 1998 and he speaks of the many trips he has made to the Stowe Show since then….and some of the repairs he has made on the 86 year-old car. From our conversation, I think he knows a thing or two about how to keep this roadster on the road.

In trying to make a 100% connection between this Buick and the St. Albans Fire Department, I asked Greg haw he knew it was the Buick in the fire station picture. The Buick part, we know is correct and the 1927 part is also correct. The positive connection with the fire house was made from the fact that the “St. Albans Fire Department” logo was still on the car’s doors when Dell brought the car home.
There are two remaining mysteries and we would like to hear from you if you have any information……