with its first 28 years still shrouded in mystery…

The truck’s known history begins about 1955 when a VAEer found it for sale On North Main Street in St. Albans, Vermont. 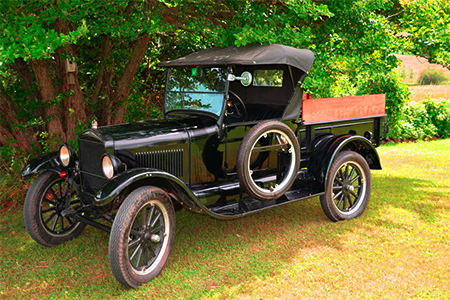 The Roadster Pickup is locally known as an East Fairfield truck, a little village fifteen miles East of Lake Champlain in Northern Vermont. The village is known for saying yes to the railroad. The story goes, when the railroad wanted to build a line through the town in the 1860s the sleepy village center 5 miles West of East Fairfield had hysterics at the idea of becoming a rowdy railroad town. East Fairfield opened its arms to the idea… rowdy and all!

East Fairfield’s nickname is “Puddledock”that came from the Spring time hub-deep mud in the streets and the folks who live there are called “Puddledockers”; terms of endearment used to this day. When the St. Johnsbury and Lake Champlain Railroad came through town the transition was instantaneous. Hotels, granaries, a drug store, bars and pool halls were built overnight. Water power at the two dams on Black Creek sprouted all kinds of new enterprises. Puddledock took on the reputation as a rowdy railroad town while the little town center, just a few miles away, stayed safely away.

The story also goes that the model T spent many of its years, previous to 1955, in Puddledock, in fact the exact residence and driveway has been identified as its home. This information has been passed down from villagers long past away and the home was torn down many years ago. Is the story true, what was the truck used for and who owned it during that time has not been figured out completely, the detective works continues…

The VAEer who found the truck for sale in 1955 is Gael Boardman. The seller who brought it to Walter Benjaman’s garage on North Main Street, St Albans to sell it was unknown when Gael offered $20.00 to buy it. When Gael returned to find if the seller accepted his offer, he found a local hotel owner, Doug Kelly, had bought the truck for $25.00. Wheel Tracks found Mr. Boardman, sixty one years later, still a little upset he got “out-offered” by Mr. Kelly. Gael was prepared to go all the way to $30.00 but in the traditional way of bartering, one does not let that information out until the exact ‘correct’ time.

For many years the Model T was parked in a shed behind the Kelly Hotel on South Main Street until rumor had it that Mr. Kelly sold it to someone in the Boston area. 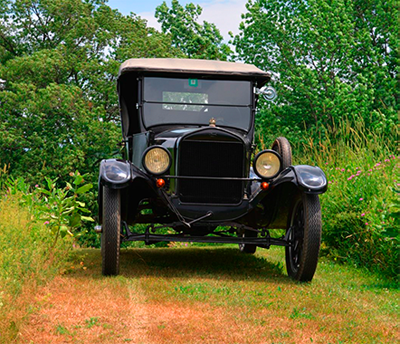 Enter another VAEer… John Lavallee. John’s dad and grandfather had a machine shop in Massachusetts and had decided to expand into Northern Vermont in the mid 1960s. John was a young man when he joined his father and grandfather in Winooski to inspect the building they had just purchased along the river and that is when he spotted a Model T pickup in one of the dark corners of the building. The truck then had a new owner, John Lavallee. A short time later, John heard a rumor the â€œTâ€ had belonged to Mr. Kelly and after telling John it was impossible that the truck had been his, Mr. Kelly recognized the repair work he had done on the rear of the vehicle. The Model T was in fact the Kelly/ East Fairfield truck. Over the 20 to 22 years that John owned the truck, not a whole lot was done to it.

The Model T caught the eye of a dairy farmer in 1987 and again it found a new home, but this home was special… it was back in East Fairfield!

Dennis Dodd belonged to the VAE and his farm is a mile or two just outside the village. Over the 29 years the Model T hardly ever missed an area parade. Dennis and Linda’s children along with many other local kids spent many great times throwing candy to parade spectators from the pickup’s bed.

The “T” also had quite a transformation on Dennis’ farm. It got a Ruxtal rear-end and Rocky Mountain brakes. A new top and bed, a complete motor job and all the running gear trimmings along with a new coat of paint. Dennis told about the memorable hours he and his son drove the back roads enjoying the country side. He spoke of all the sights you can see when going 20MPH. He would just pop the Ruxtal into gear and chug along not having to shift, no mater how steep the hills.

So, now it is 2016 and Dennis has his attention on a 1908 International high Wheeler project. He also has a ’31 Model A sedan and a really cool home-built Model A Speedster… and the Model T pickup has caught the eye of another VAEer!

Enter the Wheel Tracks editor… The Ruxtal rear-end and Rocky Mtn. brakes was more than the guy could resist, the truck, again, has a new home. The good news is the 1927 model T pickup is only a few miles North of its East Fairfield beginnings. The bad news is the amount of filled space that had to be freed-up to make room for the “T”. All good, when you step back and look at the scheme of things…