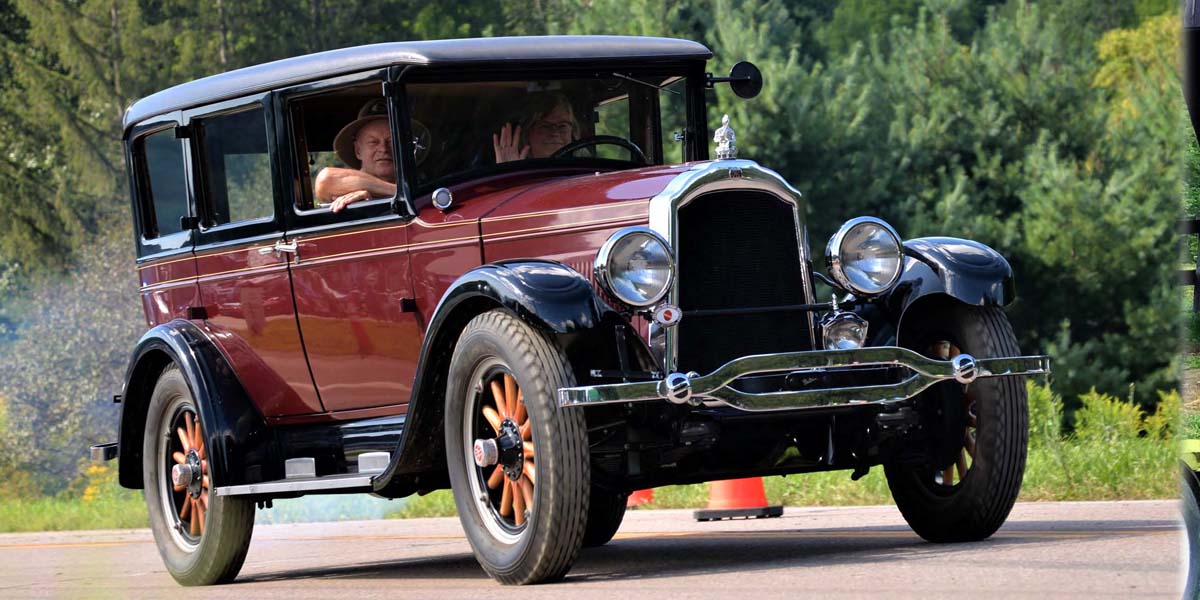 Tammy and Charlie Thompson, (Daughter and Dad), are on their way to a parade in this beautiful 1929 Willys Knight Sedan.

Tammy’s 70A Willys Knight is a sight to be seen! The lines are great, it was built during the height of the factory’s output (140,000 were built that year), and the engineering quality is among the best.

One other small detail is the type of engine that hauls this beauty around. The gent who developed this unique engine is Charles Knight. One requirement of his, if you wanted to use his engine, is that his name had to be added to the vehicle name: thus “Willys Knight”. The Knight engine does not use the normal valves we are use to. When he was thirty-two years-old, Mr. Knight purchased a vehicle in 1901 and was very annoyed by the sound of the slapping valve. He found financial backing and developed an engine that was added to a new automobile in 1906, called the “Silent Knight”. His cure for all that noise was to dump the old valves and add two sleeves inside each cylinder. Each sleeve had built-in holes and when certain holes lined up, the exhaust was allowed to leave. Another set of holes would be lined up when the gas/air mixture needed to get into the cylinder. Tammy’s Willys Knight model was built from 1914 through 1933.

Tammy purchased her Sedan about six years ago from a gent in Connecticut. She was influenced, in a small way, from her dad, Charlie Thompson, who has a Whippet, built by the same company; Willys-Overland. She fell in love with the brand while joining her dad to a national Willys-Overland gathering. Her car came up for sale and with the help of her dad and other WOKR Club members, she bought it. Beside the brand, the condition and the car’s history; there was one other important reason for her purchase….it was red, her favorite color.

Tammy has become use to the 200-to-300-mile tours that happen when their WOKR club gets together. Asked about the longest distance she has traveled, driving her car, she said the trip from Marietta, Georgia to Jasper, Indiana was the longest. Her son, Ethan, and her dad, Charlie, joined her in the 800-mile round-trip. Except for a small emergency about a half hour at the start the trip, all went very well. The emergency was a fire from a dragging right-rear brake, which happens to be just inches from the gas tank. Ethan could smell smoke and it took a while to convince his mother it was coming from “her” car. A squirt or two from a fire extinguisher, a short wait for everything to cool down and a small adjustment to matched that mechanical brake to the other three, and they were on their way again.

She said her Willys Knight loves to cruise at 43 MPH. The Knight engines are noted for burning oil, and some, putting out lots of tail-pipe smoke while driving down the highway. You can see from the front page, as Tammy was gearing up to entering the highway, that her engine is not a smoker.

The only other mishap was when she had entered a rally race with her Willys Knight. Her navigator had to cancel at the last minute, so she decided to go anyway. All was going very well as she followed a competitor in his speedy little sports car; until “the corner”. She said the car requires strong arm steering, and while the little sports car sped around the corner, she went straight. She was very proud that she did not do a “wheelie” like she had done a few years earlier with her dad’s Whippet. She recovered and came in sixth place. (Tammy’s definition of a wheelie, in a car, is to have the two tires on the left or the right, off the ground.)

Tammy’s next project is a Vermont Willys Knight. A 1928 Model 56 Sport Coupe that had belonged to Gael Boardman from the mid-50s. There is a WOKR gathering in Huntsville, Georgia next June and she hopes to be driving it.

That “Coupe” has lots of VAE club history going back to when Gael was a young man and Pevey Peake was having his old-car adventures. If you do a little Wheel Tracks research, you can find Gael-stories about the coupe. One story he wrote is called “Takes a Licking, Keeps on Smoking”, where he mentions driving the car over 100,000 miles while he had it. This coupe now has a new life with Tammy and ready to make much more history.
Ain’t this old-car stuff fantastic?

Good luck in your travels Tammy. You don’t need to be told to have a good time, you have that part exactly right.