A Lot Of Money Goes A Long Way – from Wendell Noble 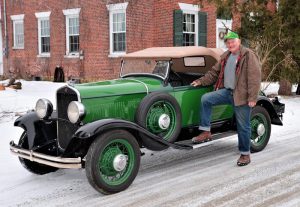 A funny thing about my doing a car restoration, although I’m working toward a goal, when I get there, it’s a bit of a let down. I am happy with the results. If I weren’t, it wouldn’t be done yet.

It all started back in 2010 with a call from Dave Maunsell. He had been assembling an inventory of parts for a 1930 Chrysler CJ roadster for years with the intention of ultimately turning it into a completed car. However, I think Dave had become skeptical about ever getting to it, and came to feel some money, would be of more use to him. He was concerned that the project car go to someone who would complete it to his satisfaction. Dave had familiarized himself with my 1929 Plymouth and the work I had done on it. Structurally, it’s very similar to the Chrysler CJ and I think this satisfied him that I might do right by this project.

I’m told that “CJ” stands for Chrysler Junior. It was the smallest Chrysler at the time and, in fact, is the same size as the Plymouth but has a six cylinder engine instead of the Plymouth four.

Once the deal was struck, Gael Boardman, Gary Olney and I headed over to Dave’s place in Greensboro. We pulled parts from all corners of his garage and loaded up Gael’s truck, my truck and my trailer. Upon arrival at my place, Gael asked if I had any doors on my load. None of us remembered seeing any car doors. I gave Dave a phone call and he assured me that there should be two doors. A day or two later, he called back to announce that he had found the doors… in his hall closet. I can’t understand why it didn’t occur to us to look there in the first place. 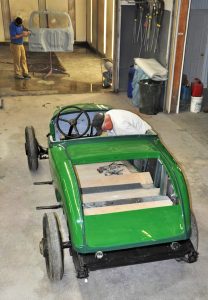 The restoration has been enjoyable. The frame and drive train were in good order and required very little attention to fundamentals. Electrical system, brakes, and steering needed to be done from the ground up. The big efforts were needed on the body and upholstery. The body had to be built completely, starting with the interior wood skeleton and then a lot of “tin knocking” to get the sheet metal patched, smoothed and properly aligned. Many parts had to be made from scratch. These included seat cushions from seat parts of other cars, mounting hardware for the side-mount spare tires, top irons and bows for the folding top, door hinges, bumper clamps and correct running boards. The car came with an original front bumper, but no rear bumper. I discovered that model A Ford bumpers are the same width and length, but are not curved like the Chrysler’s. Bailey Spring in Essex Junction did a great job of perfectly arching the Ford bumpers without so much as scratching the Chrome. I think I know my skill limits, so the finish painting was done by Mountain View Auto Body of Enosburgh, upholstery and top were done by Coggio Upholstery of Richmond and plating was done by Anthony Cook of Shaftsbury.

The car is now ready for it’s debut, just as soon as the frost is out and our road is dry. I’ve concluded that the secret to a decent car restoration is to spend a lot of money on it. I’m not talking about a rattle can and pop rivet job here. Once you’re prepared to do that, you’re on your way.