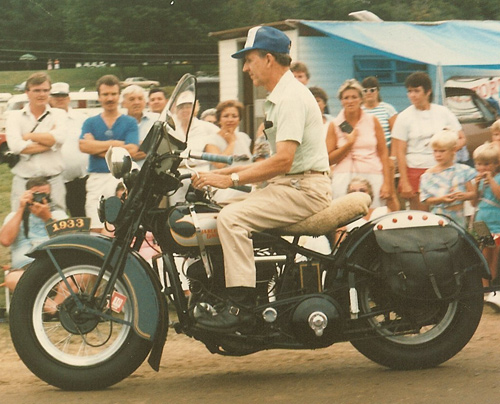 In September,1944; several of us newly-commissioned Second-Lieutenants in the Army Air Corps, having just received our pilots’ wings, reported for training on B-24s at Cortland, Alabama. One of my buddies had spotted a neat looking red motorcycle for sale as he was coming through Birmingham, and we thought it might be fun to share ownership and have personal transportation. Acting on this idea we took a bus to Birmingham our first free weekend and bought the motorcycle; which turned out to be a low-mileage 1942 Army Surplus WLA Harley with a buddy seat. Although neither of us had ever ridden before, we both considered ourselves expert by the time we got back to Cortland.

I enjoyed the 45 cubic inch WLA, but always had the feeling that it should be geared a bit higher for comfortable cruising. Back at the barracks I usually parked next to an old ’33 VLE 74 cubic inch Harley which never seemed to be used. Upon investigation I found that it belonged to a fellow in the next barracks who would be glad to sell it for $75.00, “as is”. The only trouble was that it had a broken piston. That didn’t seem like an insurmountable obstacle, so three of us chipped in $25.00 a piece and became owners. It soon became apparent, however, that my interest was greater than theirs; so I became sole owner.

At that point, I borrowed a buddy’s car and took the engine to Birmingham to the Harley shop for a quick repair. New pistons were not available during the war so the dealer fitted a good used four -ring piston in the one cylinder and retained the three ring piston in the other cylinder. It didn’t do too much to promote smooth running, but then Harley big twins never were famous for smoothness and freedom from vibration. At any rate, it went for several years and many miles before needing serious work again.

While the engine was out of the frame, I convinced one of the painters in the maintenance shop to paint the tanks and fenders so the bike was starting to look quite presentable. About this time I had moved the whole operation inside the hallway of the barracks and I remember being quite concerned when the Major pulled a surprise inspection. All he said was, ”Don’t let that thing get away from you!”

After reassembly, it became apparent that the old VLE was a more comfortable road bike than the ’42 army surplus WLA; so when I had a chance, I sold the 45 cu. In. job and continued to enjoy the old ’74 big twin. It seemed to do fine on short trips, so one weekend I ventured further afield and rode up into Kentucky to see an old friend who was stationed at Fort Campbell. This proved to be a pleasant trip and further increased my confidence in the bike. A few weeks later, when orders came through to transfer to Lincoln, Nebraska, with a ten day delay en route, it seemed like an excellent opportunity to ride the bike home to Vermont. The only trouble was, it was the day after Christmas when I headed north and the weather was not cooperating. It rained most of the way across Tennessee, and north of Bristol, Virginia, up Route 11 it was all snow!

Fortunately, before starting for Vermont I had acquired a winter windshield, which provided more protection for the hands as well as the lower body. I also made some aluminum leg shields which were attached to the crash bar, and these also afforded some protection from the elements. The farther north I traveled, the more I needed protection from the elements; because although the weather had cleared, the temperature had dropped. Between the cold and trying to keep the bike in the wheel tracks of the snow-covered road, it pretty much took the fun out of riding.

That night I made it to Hagerstown, Maryland, where I stayed overnight and put the Harley in their garage so I knew it would start in the morning. The temperature was down around 0 degrees Fahrenheit. When I resumed travel in the morning, progress was slow with stops at least every half hour to get warmed up. Late that afternoon, when I reached Wilkes-Barre, Pennsylvania there was nearly a foot of snow on the ground. I found that Railway Express would ship the bike without it being crated. That was the best $35.00 I ever spent!

A couple of days after arriving home by train, I had a call from the depot saying they had a motorcycle for Lt. Rice on their back platform; and would I come and get it? That was easier said than done because it was still very cold and everything in Burlington was covered by a thin coating of ice with snow on top of it. There was no salt and very little sand used on the streets in those days. However, the deed was finally accomplished and the bike was in storage for the rest of the winter.

In the spring I was still in the Service, but I got a call from one of my buddies who was home on furlough and wanted to borrow the Harley. This was fine except he got reassigned to a base in Plattsburgh, and did a bit of commuting and also visited relatives in Maine. When I came home on furlough a few months later, I found the speedometer showed 7,000 additional miles and one tire had cord showing in the tread.

Incidentally, I discovered the bike had Goodyear Safety Tubes in both tires; which I thought was a great idea, but after about the third flat and patch application and still having a slow leak, I relegated both tubes to the circular file and replace them with new conventional tubes.

The summer of 1946 I was home from the Air Corps and going to college at the University of Vermont in Burlington. I also had a job as a caretaker of a cabin on the Long Trail, a hiking trail running along the spine of the Green Mountains from Massachusetts to Canada. The cabin was accessible by a 3 1/2 mile logging road from the valley, so I commuted around 50 miles each day on the Harley. It continued to provide most of my transportation in good weather until it became more expedient to use my 1922 Studebaker touring car.

In the spring of ’47 I planned to head west to spend the summer in Boise, Idaho; and since a good buddy was heading for Oklahoma, we made up a hitch for the back of his ’40 Plymouth. After removing the front wheel from the bike, we towed it as far as Springfield, Missouri. There Emily, my wife to be, who was also on the trip, took the bus to Little Rock to visit her folks.

After reassembling the bike, I too headed for Arkansas to meet her folks for the first time. After a too short but pleasant visit in Little Rock, I again continued my trek westward to visit a cousin in El Reno, Oklahoma, and on across the Texas panhandle into New Mexico and over Ratone Pass into Colorado and over Loveland Pass and the Rockies in Utah, and finally to Boise, Idaho. It was a great trip and the Harley performed valiantly. After a summer spent piling brush and fighting forest fires for the U.S. Forest Service in the Payette National Forest about 60 miles north of Boise, it was good to be headed back to Vermont again. The return trip was by way of Yellowstone National Park, where a bear ate the bread and milk I’d left on the picnic table as I slept on the ground nearby! From Yellowstone I continued east, mostly on Rt 20, to Chicago, Illinois; where I enjoyed the Museum of Science and Industry and then on to the Ford Museum in Detroit. My only bad memory of the trip was a stop for oil at a Harley shop in Kansas where I discovered, with a shock, that the front axle nut had come off; letting the axle work part of the way out of the front fork. It was quickly fixed and just in time to avert a certain disaster!

Over the next few years the bike got only occasional use and was eventually stored for several years. It must have been in the 1970’s that I got it out and rode some. In the late 1980’s, after my retirement, I decided to restore the bike. The appearance had deteriorated somewhat and there are always mechanicals that can be improved. I did most of the disassembly and reassembly myself. Harbor Vintage Motor Company in Jonesville, Vermont did the engine, rebored .020 oversize etc. Dave Gonyon, a VAE member, did the paint job and Henry LaCombe, also a VAE member, did artwork on the tanks.

Up until 2004, a lifelong buddy, Dave Otis, and I would get together a few times during the season; even though he had a Suzuki, and enjoy some nice rides in Vermont as well as an occasional trip to the White Mountains of New Hampshire and the Adirondacks of New York State. About the last three years the bike has been used very little, as I’m considered by some members of the family (just because I’m 83) to be too old to cope with such a “dangerous machine”.

Incidentally, 1933 was a year of very limited production for Harley Davidson, and, even though $330.00 would buy a new one, there were not many people around that time with that much cash. So for many years, my machine was one of only two that were known to be in the State of Vermont.

I just hope that future owners of this bike will derive as much pleasure and pride of ownership as I have enjoyed these many years.