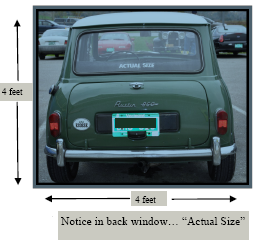 Following WWII, the British auto industry was under the mandate of “Export or Die”. As a result, the most popular imported cars in the States after the War were British. According to Ward’s Auto World, the British had a 96% share of the U.S. imported car market in 1952. Today it is less than 1%. Popular post-war British cars were the MG TD and the Jaguar XK120. When most “car people” think of British cars, sports cars come to mind. Indeed, at the British Invasion of Stowe car show, Austin Healeys, MGs and Triumphs are the most popular entries among the hundreds of cars that show up.

But the highest volume product ever made by the British auto industry was the Mini. With 5,387,862 units produced from 1959 to 2000, the Mini outlasted several of its corporate owners. Though Minis were never imported in great numbers to the U.S., they were highly innovative when introduced and set the style of transverse engine design for practically all front-wheel drive cars that followed. The concept was exceptional:
a practical sub-compact car 10 feet long, 4 feet wide, 4 feet tall that would seat 4 adults. Over 80% of the car’s volume is for its occupants. Its 10″ wheels are located at the corners of the body. Originally called the Austin Seven, the car came equipped with a 38 h.p. 4 cylinder en-gine of 850cc. capacity. By 1964, some were factory-modified with a 1275 cc, 78 h.p. engine by Formula I car designer John Cooper. Thus was born the Austin Cooper, aka Austin Mini Cooper. These cars went on to win rugged European rallys with boring regularity in the 1960s, including the Monte Carlo Rally in 3 separate years. A highly modified Mini from New Zealand recently clocked over 200 mph at Bonneville.

Most Mini enthusiasts don’t recognize the current BMW-made Mini offering as a “proper” Mini: It weighs almost twice as much and is a full 2 feet longer. It is available in styles that are even heavier and longer yet. That being said, the new Mini is a car better suited for American conditions than the original Mini ever was. In standard form, the old Minis suffered from the usual British car maladies: overheating, leaking oil, weak engine internals, poorly shifting transmissions and generally poor quality control. But an old Mini is so light and small that it can corner at frightening speeds if you keep your right foot into it. It has been described as a go-cart on steroids, with (as the Brits would say) cheeky good looks to boot.

I bought my Austin Mini around 1977, but family responsibilities kept me from getting it on the road until the late 1990s. I had wanted one since I was a kid in the 1960s. Knowing the mechanical shortcomings of the original car, I knew I was fated to perform an engine swap. The Japanese small car field could provide the powerplant needed to make my Mini a durable highway performer. Equipped with a tape measure, I checked the junkyards for a donor vehicle with an engine/transmission of suitable size, such that I wouldn’t have to cut the Mini body. I found such a front-wheel drive power unit in a 1993 Geo Metro. I was a bit wary at first since this car has a computer on board to control the fuel injection system. But then I reasoned that it’s only wiring and I should not fear. I was right – with a factory wiring schematic I could tell where each wire had to go and it all worked out well.

This Geo Metro engine is made by Suzuki and it is “the Little Engine that Could”. It is a 3 cylinder, 993 cc. 55 h.p. unit coupled to a 5 speed transmission that shifts as smooth as silk and weighs 100 pounds less than the original 38 h.p. engine. My car weighs in at just under 1300 pounds without the driver. The powerplant swap necessitated some tricky surgery on the front subframe but it, too, went well. My Mini looks absolutely stock. But its a sleeper that will elicit a loud chirp from the front wheels when you shift into 2nd gear with a little extra throttle. Its a blast to drive. A recent 210 mile trip was accomplished using 4.1 gallons of regular gas. Prius owners, eat your hearts out!