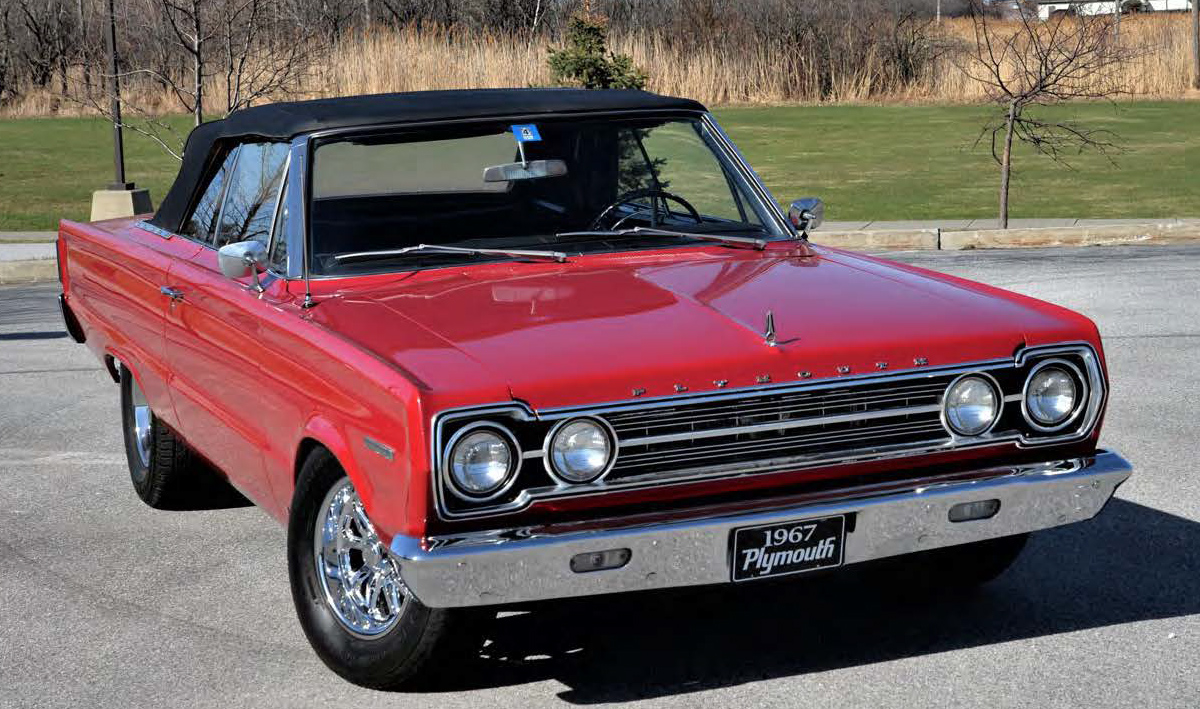 A new addition in the family of Angle and Jeff Vos. One of 1552 Belvedere II Convertibles now lives in St. Albans, Vermont.

You can see the pride in Jeff Vos’ face anytime he mentions his ‘67 Belvedere. Most likely, when he was growing up in the North East Kingdom of Vermont, this red convertible was on his mind.

After many years as a carpenter and his present career with his own house inspection business, he finally owns one. Thanks to the Hemmings publication, he found the rust-free Plymouth in Florida.

Chrysler made the Belvedere from 1954 to 1970. The Belvedere name was first used for a new hardtop body style in the Plymouth Cranbrook line for the 1951 model year. In 1954 the Belvedere replaced the Cranbrook as the top trim and became a full model line with sedans, station wagons and convertible body styles. The Belvedere continued as Plymouth’s full-sized car until 1965, when it became an intermediate, and was replaced after the 1970 model year by the Satellite, a name originally used for the top-trim level Belvederes. Jeff’s Belvedere is a II. The Belvedere I was the lower sub-model in 1967 and the next two up from Jeff’s was the Satellite and the high performance GTX added just that year.

When first meeting Jeff’s Plymouth, especially if the engine is running, “high performance” is what you hear. Most likely because the 440 engine is telling you “it is ready to go! The smaller engine the car came out of the factory with, was replaced by the former owner, along with the normal carb and exhaust additions that come with a major change like that.

Jeff’s understanding is the Florida owner made a really good decision when he decided to sell the vehicle, but a very unfortunate outcome came from it. The carburator and intake manifold was replaced to better match the engine.

During the inspection that Jeff commissioned, the car performed wonderfully, and the decision was made to purchase it and have it shipped to St Albans. During the unloading in St Albans, the car’s engine started to show signs there was something wrong. When Jeff took the car to an engine shop, the first thing they did was take the oil filter off and the problem was found. The engine had been destroyed because someone had not removed a cloth rag in the manifold when they installed the new carburetor. If you have been part of discussions among VAEers over the years, you will hear similar stories of close calls. One story comes to mind of a mouse nest that was swallowed by an engine.

Jeff’s Plymouth is fine now and better than ever. The engine has been rebuilt by one of the top shops in Vermont. While he was at it, Jeff decided to add power steering and front disc brakes. So, the Belvedere Con-ertible that he has dreamed about is now in his garage and purring.

The pilot episode for the television show
Adam-12 featured a 1967 Belvedere as the standard LAPD police cruiser.
Belvederes were used in police service from the 1960s to the early 1970s, when they were replaced by the Plymouth Gran Fury. They were prominent in both the LAPD and New York Police Department.