14 year old VAE member, Jason Warren and his Reatta, are winners at our 58th Car Show in Stowe 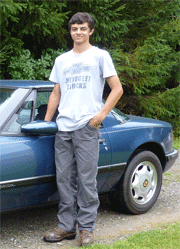 I was very excited to find out I had won 3rd place with my 1988 Buick Reatta having entered it in class 21 for non-Ford, Non-Chevy, all, for 1966-1990 model years.  I had my car entered for judging last year, but was not available during the judging process and I think this may have hurt my chances. This year I made sure to be with my car because the judges had a lot of questions.

I bought my Reatta in 2014 with money I had earned from a part time job I’ve had since I was 11 (I’m 14 now). I found the car in Fairfax, VT and paid $640.00 for it. The body of the car was and is in very good condition mainly because the front fenders are made from a plastic polymer and the remaining body panels are double sided galvanized steel. With over 185,000 miles on the car, the complete suspension, braking, and exhaust systems needed to be replaced. As my dad completed repairs on one side of the car, I would try to repeat the process on the other side. Sometimes things worked out, sometimes not so much.

I think I chose to buy a Reatta because our family already had two 1991’s and I thought it would be neat to have my own. I like the styling and all the digital instrumentation including a fully functional CRT touch screen that controls the radio, climate control, gauges, trip computer, and full onboard engine diagnostics.

1988 was the first year of production for the Buick Reatta and 4708 were hand built that year at the Craft Center in Lancing, Michigan. All Reattas’ are front wheel drive and used GM’s popular and “bullet proof” 3.8L V6 engine with a 4spd automatic transmission. The engine produces 165HP but the car weighs 3400 lbs so with these specs, it’s performance although acceptable, is lack luster compared to its sporty appearance. I am real happy with my Reatta, but if I could choose any vehicle to own, it would be a Mercedes Benz Unimog.

I will be a Freshman at Lamoille Union High School this fall and have plans to enter into the Auto Tech Center for my Junior and Senior year. My favorite subject in school is science and I think I would like to have a future in either automotive or motor sport repair. I like all things with engines especially if they are vintage. I’m already looking forward to working at and bringing my car back to the Antique & Classic Car Meet next year.