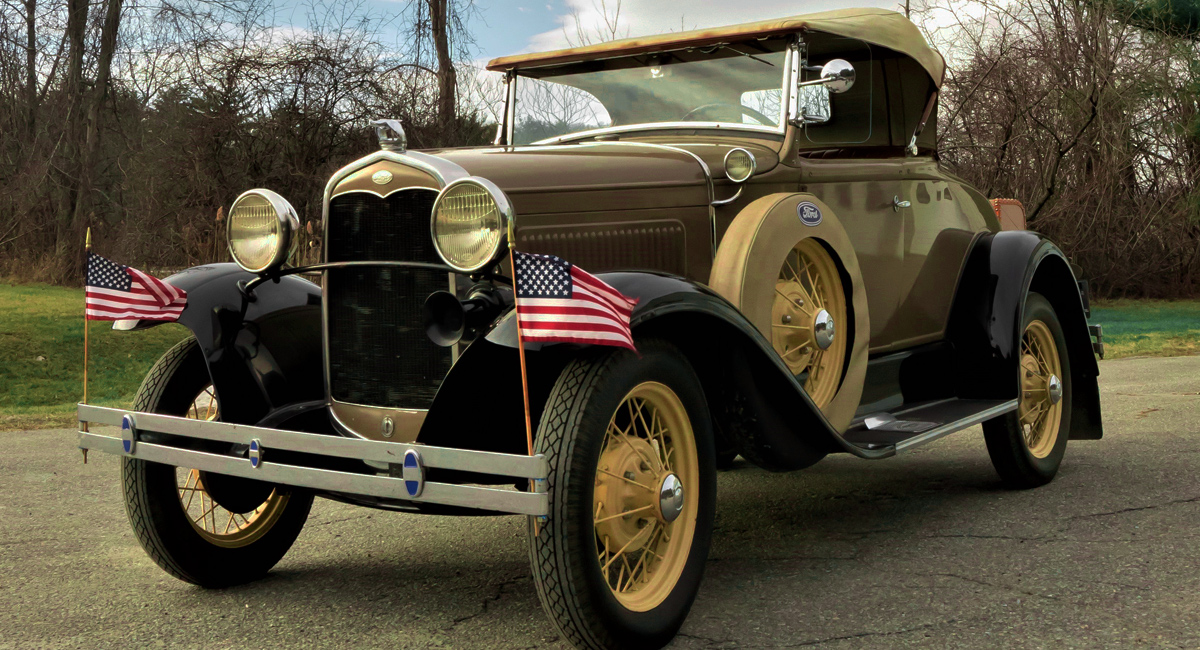 I became a member of VAE just a few years ago when I registered my 1967 Austin Healey 3000 MK III . Although I have never participated in any of the events, I have enjoyed your monthly magazine. The pictures and articles have sparked many memories of my past challenges with automobiles.

The Model A (Ford) is, without a doubt, the one vehicle that I would put in first place, as holding both, some of my fondest and most chilling memories from my early automobile experiences.

When I was 14 my mother wanted a low spot in the lawn filled. Normally, that might have been a job that some young people would consider work. For me and my friend it was an opportunity to drive the “A” and to siphon a gallon of gas out of my father’s ‘37 Ford Coach to run it. We found a bank of soft dirt and easy digging that had been pushed up for a logging header. We commenced to load the back of that “A” with a good heavy load not thinking about the drive up a long hill that had a steep bank on one side, the capability of the brakes, or the power of the engine. As we got about halfway up the hill the engine ran out of power and stopped. The brakes did not hold. Then it started to roll backwards along with the engine turning backwards. My buddy bailed out but I stayed with it. Down the hill backwards the “A” and I went until we got to the corner at the bottom, there it went off the road and hit a big rock unloading the entire load of dirt. My first comment to my buddy with shaking legs and tears in my eyes was, “I’m never driving that thing again.” The next day I went down and drove it back to the barn!

I always admired the Model A Roadster and always wanted one but I didn’t have the resources when I was younger. Then the busyness of working for a living, raising a family, taking care of our little mountainside family farm, and a wife with an illness made it difficult to think about getting an old car.

Early last Fall, while driving along Route 7 to Brandon, VT, I saw a beautiful Roadster parked beside the road with a “For Sale” sign in the window. Believing it was one of those aftermarket copies, I didn’t give it another thought until my nephew visited me a week or two later. He said, “Uncle Dave, have you seen that Model A Roadster for sale on Route 7 in Brandon?” Of course I said “Yes”. I told him that I thought it wasn’t authentic. He was quite sure that it was. He said he would stop on his way home and look it over more closely. I received an excited call from him that evening, and he told me that as far as he could tell, it had been restored according to guidelines and that I should really consider buying it!

I had a project to finish up here at the farm so it was a couple of days before I went to find out about it only to sadly discover, when I arrived at the place where it had been parked, that it was gone! I asked a neighbor who said she didn’t know anything about it. I was disappointed, but I didn’t give up. After some searching and a couple of phone calls, I received a reply from the owner. He told me that he hadn’t sold it but had put it away for the winter. It was still for sale and he said that he would meet me if I was seriously interested. We agreed to meet the next afternoon.

When I arrived (early I might add) he was already there standing beside the Roadster with the top down and the rumble seat open. There it was, all shiny and glistening in the sun. What a beauty! Suddenly I was conflicted. I had the same feeling that I had when I was a boy standing in front of the candy counter of the local General Store wanting something that I thought I couldn’t have. But then I realized I had the same chance of taking my money with me as I did in taking the “A” with me when I died and that is zero! Yes, there was no reason I couldn’t have it.

After careful inspection of the Roadster and continued discussion with the owner (including negotiating price) I said to myself, “I think I’m going to buy it”. Then he started it up and when I heard it crank and the musical sound of the exhaust – WOW – that was it! All those happy, carefree days of a youngster flashed before me. The deal was sealed!

It is now stored in the barn and I am looking forward to Spring and a good Summer of touring and parades.

Hopefully I will be able to join some of VAE’s outings.

I have to thank my nephew, David Stone, for giving me the prod that I needed.

Editor’s note….. Dave’s grandson took these wonderful pictures of the Model A. We thank you Johnathan.