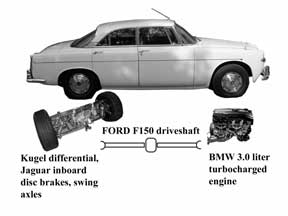 A small group of us in the VAE fell in love with English cars in our youths. One car, that never sold in volume in this country, was the ROVER P5. In 2011, I made a trip to Scotland to acquire the car shown on the cover. Before I tell about that trip, I want to tell you what is planned for the car. It will end up as a fully equipped rally car with a 13 inch Mac computer in the instrument panel and a PATHFINDER infrared driving light system, just to make sure I can see 700 feet ahead at night.

Modifications for ROVER include a 3.0 liter BMW N55 engine with turbocharger, tuned to achieve 384 horsepower at 5,700 RPM. Power will be transferred to the rear wheels through a 6-speed manual BMW transmission with a “Guibo”, a flex disc, at the output shaft. The drive shaft is from an extended cab FORD F150. An adapter plate, machined by Paul Gosselin of HYDRO PRECISION in Colchester, fits on the front SPICER U-joint yoke and bolts directly to the Guibo.

The back of the drive shaft is connected to the differential with a especially made SPICER 1330 to 1350 U-joint adapter. The differential is a stainless steel and chrome plated FORD 9”, 39/13 ratio. Jaguar inboard brakes are also stainless steel, as are the swing axles. The entire unit, made by Kugel Komponents of La Habra, CA, is being installed in the ROVER unitized body by MARK’S AUTO in Monkton. This is the first time that a Kugel unit has been placed in a unitized body.

The trip to Scotland to buy the car was fraught with missteps, coincidence, and incredible luck. I rode a CONTINENTAL flight from Newark to Edinburgh, where I left my shaving kit in the airport men’s room. After retrieving it from lost and found, I took a train to Berwickshire, where the exit door jammed and wouldn’t let me off. Ten (10) miles further, I got off in a strange place that had no station agent and a phone that required a British credit card. Fortunately, a landscaper working on a yard close by had a brother in Philadelphia. He called out……“What kin I doo fur ya, Yank?”

A cell phone call summoned the antique car dealer and the whole thing turned around. The dealer drove ROVER and I rode in it for the first time. I was treated to lunch at a café in North Berwick. Over lunch, I discovered that a Scottish lady at the ta-ble was good friends with a couple in Essex Center that she has known for 45 years!
“My husband, Lyle, plays in the Berwickshire pipe band. Our American friends come every August so that he and Lyle can play bag-pipes at the Edinburgh Tattoo,” she said. “When we come to Vermont, we stay with them in Essex Center.”

Author’s note: It’s a good thing I didn’t go over there to meet another woman! By noon, 3200 miles away, my cover would have been blown…..
Having had lunch, the dealer and I went out to find a crowd around ROVER, admiring it. A little Scottish boy approached and put his hand on the right-front fender. His father, horrified, yelled: “Dinna touch the car, lad ! Dinna touch the car” !

At that point, I realized that I had to have ROVER.