The car is a 1930 Hupmobile Model S sedan with a 210cu-in Century 6 engine. The sales ads that year stated 70 horse power 70 miles per hour.

I purchased the car from a would be restorer in Pointe Claire, Quebec, in pieces, in 1980. A post card in the car stated it had originally been owned by the Graham family in Hawksbury, Ontario. I believe I am the third owner. Preservation work was slow as I had no idea of what a Hupmobile was. A chance meeting with Pevril Peake and his Hupp allowed me to learn the details of the car. Pevril’s Hupp had wire wheels but he wanted solid disc wheels like mine as he was tired of cleaning the spokes on his.

The first trip was to Stowe in 1984. That was one adventure I wont forget. We travelled from Pointe Claire Quebec a distance of about 150 miles. Every 5 miles or so the car would backfire and die. We made it to Stowe and even did the parade or at least we made it past the reviewing stand. By now we were keeping the mosquitoes away with the smoke. The car died again just over the bridge on Mountain road. It would not climb the hill. I removed a spark plug and found it totally carboned over. After cleaning the plugs we made it back to the Scandinavian Motel where we were staying. Sunday was spent under the hood with lots of help and advice from many car guys. Final conclusion; the float in the vacuum tank leaked and allowed raw gas directly into the manifold.

A few days in Bristol and the help of Pev’s friend Karl gave the car new life. We drove home at a nice steady 45 to 50 mph.

We attended several more Stowe meets with the car until I was transferred to Calgary Alberta in 1990. The car has since given me a few more headaches since arriving here. The higher altitude may be a factor. We are at 3000 feet ASL. In any event the car has been responsible for the opportunity to meet a lot of very wonderful people in the car hobby.

I look forward to the next visit to Stowe. I definitely miss the show and flea market. I am still trying to find anything like it here. 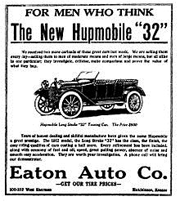 Editor’s notes… Robert Craig Hupp, a former employee of Oldsmobile and Ford, found-ed the company with his brother Louis Gorham Hupp in 1908. Production began in 1909. Following disagreements with his financial backers Robert Hupp sold his stock in the Hupp Motor Car Company and established the short-lived RCH Automobile Company, later the Hupp-Yeats Electric Car Company. In 1912, Hupp would be one of two automakers pioneering the use of all-steel bodies. Hupp Motor Company continued to grow after its founder left. A new plant was purchased in 1924 as Hupp competed strongly against Ford and Chevrolet. DuBois Young became company president in 1924 moving up from vice-president of manufacturing. By 1928 sales had reached over 65,000 units. To increase production and handle the growth in sales, Hupp purchased the Chandler-Cleveland Motors Corporation (Chandler Motor Car) for its manufacturing facilities. Sales and production began to fall even before the onset of the depression in 1930. A strategy to make the Hupmobile a larger, more expensive car began with the 1925 introduction of an 8-cylinder model, followed by the discontinuance of the traditional 4-cylinder Hupmobile. While aiming for a seemingly more lucrative market segment, Hupp essentially turned its back on its established clientele. Unfortunately, the company made the same mistake that many other medium-priced carmakers were making at the same time. Namely, in an attempt to capture every possible sale, they offered many different models. With Hupmobile’s relatively low production volume, the result was that no model could be produced in sufficient quantity to keep manufacturing costs low enough to provide an operating profit.

Hupp abandoned its more conservatively styled product line and turned to industrial designer Raymond Loewy to design its 1932 Hupp cyclefender, a flashy roadster that did well at the track, but sales continued to decline. 1934 saw the introduction of a striking restyle called the “Aerodynamic” by Loewy, as well as the lower-priced series 417-W using Murray-built slightly-modified Ford bodies.

Despite technical innovations, squabbles among stockholders and an attempted hostile takeover in 1935 took their toll on the company. By 1936 the company was forced to sell some of its plants and assets and in 1937 Hupmobile suspended manufacturing. A new line of six- and eight-cylinder cars was fielded for 1938, but by this time Hupp had very few dealers, and sales were disappointingly low. Desperate for a return to market strength, Hupmobile acquired the production dies of the Gordon Buehrig designed Cord 810/812 from the defunct Cord Automobile Company in 1938. Hupmobile hoped that utilizing the striking Cord design in a lower-priced conventional car, called the Skylark, would return the company to financial health. Enthusiastic orders came in by the thousands, but production delays soured customer support.

Lacking adequate production facilities, Hupmobile worked out a deal with the ailing Graham-Paige Motor Co. to share the Cord dies, which would be built at Graham’s facilities. The Graham edition, called the Hollywood, differed from the Skylark in only a few minor details.

In 1939 the Hupmobile Skylark finally began delivery. Unfortunately, it had taken too many years to produce and most of the orders had been canceled. Production lasted only a couple of months, and only 319 Sky-larks were produced. Hupmobile ceased production in late summer. Graham-Paige suspended production shortly after the last Hupmobile rolled off the line.