In keeping with our interest in identifying some of the most enthusiastic VAE member over the 50 year history of our club, it’s with that same enthusiasm that this month we recognize Peveril F. Peake. 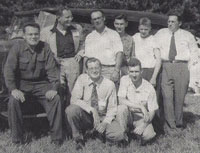 Older members will remember Pev as a charter member and a super supporter of all our early activities. His picture appears all through our 40th year book, in a wide variety of cars over many years of events.

We could probably have a meet, or maybe a series of them, just to get together to tell Pev Peake stories. He even told a few to early Wheel Tracks editors… but the best ones are the ones you get while on an old car hunt with Pev himself.

Pev has lived and breathed old cars since birth and has probably owned over one thousand cars personally. He can discuss in detail the molding differences between models and years of any make that caught his interest… and that was most of them. Best, for the VAE, however, was his regular attendance at meets with his new “find”.

He had a nose for cars and would produce one great original condition car after another. Then, not only would he share his new prize by giving you a ride or letting you drive around the block… often he’d sell you the “last month’s” car. In this way Pev was a regular supermarket for us poorer hunters.

Even today when you look around at cars owned by club members, there are still quite a few that have those Peake transferable license plate traces and that famous “Peake Quick Restoration”.

Pev used to joke that a Peak restoration (usually on a really good original car) was to polish the dash, the left side of the hood and the top of the left front fender. Very satisfying for the operator… and he was one of the best operators we know.

Thanks, Pev, for being an early, strong and dependable enthusiast. Thanks for saving untold cars from worse fates… and thanks for your enthusiastic sharing. You brought many club members into the VAE and you will always be a part of our club’s success.

3 thoughts on “Enthusiast of the Month – Peveril Peake”