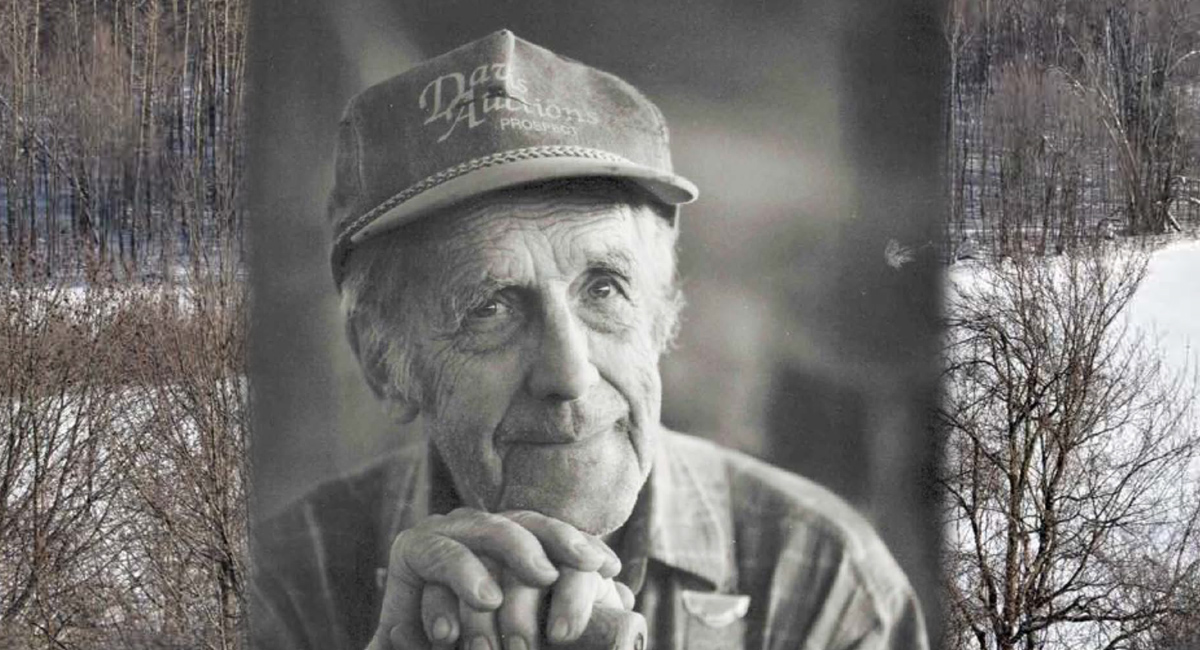 Fred Webster was just a few days from a drive-by birthday party, he would have been 100 years old when he died on January 17th 2021. Most of his years he resided in the Coventry, VT farmhouse where he was born.

Fred leaves his wife Vivian and five sons and daughters, three of his children predeceased him. For many years, Fred taught vocational agriculture in high schools, mostly in Northern Vermont.

Fred’s life was a mixture of hardship and humor, the humor always kept his glass half full. He loved throwing humor at his guests. While heading out the door one day with a guest, he grabbed his wife’s shoes that were sitting by the door. Walking off the porch, the guest asked him why he had his wife’s shoes in his hands. Fred explained by saying, “Well, did you see that little pile of money on the kitchen table? I know it will be there when I get back because she can’t go anywhere without shoes”. Next was Fred’s great joy, watching his guest’s face processing his comment.

Fred’s college long distance running record held for many years after he graduated from UVM in the 1940’s. Dancing and especially clogging was also a passion of his. In fact, he met his wife Vivian at a dance in Quebec, a match made in heaven, he would say.

His life made a small turn when he retired from teaching at 65 years old. He decided to start collecting antique farm equipment after seeing many pieces rotting in farm pastures. He was concerned the history would be lost if someone didn’t do something, he decided it would be him. From Canada to Nebraska, he started bringing old farm machinery onto his Coventry hill farm, until the buildings were full. Then he and his son, Dan, started tearing down old structures wherever they could find them and hauling the material home. Soon, there was 80,000 square feet of storage, and the hunt for antique farm machinery continued. There are hay presses, tedders, mowers, plows, harrows and corn pickers, all horse drawn. Snow rollers, wagons, rakes, seeders, manure spreaders, cultivators, reapers and the list goes on and on. He has the buggy he used, to go to grade school and even the sleigh his father, Percy, used to court his Mom, Hazel. When he more or less filled every nook and cranny of his barns he started building full sized stagecoaches, 7 or 8 of them while in his nineties.

This feature article was recently published for the U.S. American Legion……

Have you ever heard about an organization by the name of SACO, relative to WWll?

This 99-year-old gentleman pictured left was one of 2500 SACO Navy and Marine personnel during the war. He is Mr. Fred Webster and lives in the Northeast Kingdom. During a recent conversation he mentioned that he had been in the Navy during WWll. He said he had never been on a Navy ship accept to get to China, and back, in 1944 and 1945. Asked what he did in China, he had very little for a reply, accept to say, “just study these four letters, S-A-C-O”. This from a man who loves to talk.

So, the “study” began…….. SACO stands for Sino-American Special Technical Cooperative Organization created in 1942 and a treaty signed by China and the U.S. was signed the same year. The beginning purpose for the treaty was to have accurate weather forecasts for U.S. operations in the Pacific. If we knew the weather in China, we would have an idea what weather would be happening in the Pacific, for our operations against Japan.

A bit of history….. In 1942, China had been in a civil war for over 30 years. Chiang Kai-shek’s Nationalist Army against Mao Tse-tung’s Communist army. The Japanese had very little opposition from this un-industrialized country that had very little remaining energy or resources to put up much of a fight. The Japanese Army basically had no problem occupying the eastern one-third of China, and some say, would have taken over the complete country, if they had not brought the United States into the war by bombing Pearl Harbor in 1941.

The SACO treaty was signed with the nationalists government and at its height, these “weather stations (camps) covered over 1700 miles of the China coast, all behind the Japanese’s lines. These 2500 Americans were totally immersed with the Chinese Nationalist Army and had a highly respected reputation. They were sometimes called the “Rice Paddy Navy” and if more honor was needed, they were also called the “What-the-Hell Gang”.

It was not long, after the weather stations were in place and successfully operating, that other tasks were added to the “Rice Paddy Navy”. Scouting Japanese activity, demolition squads, advising and training Chinese soldiers, rescuing downed American flyers and intercepting enemy radio traffic soon became part of their operations. A few Americans scattered among the Chinese Army along the China coast from North Korea to Vietnam. Mr. Fred Webster was one or these Americans.