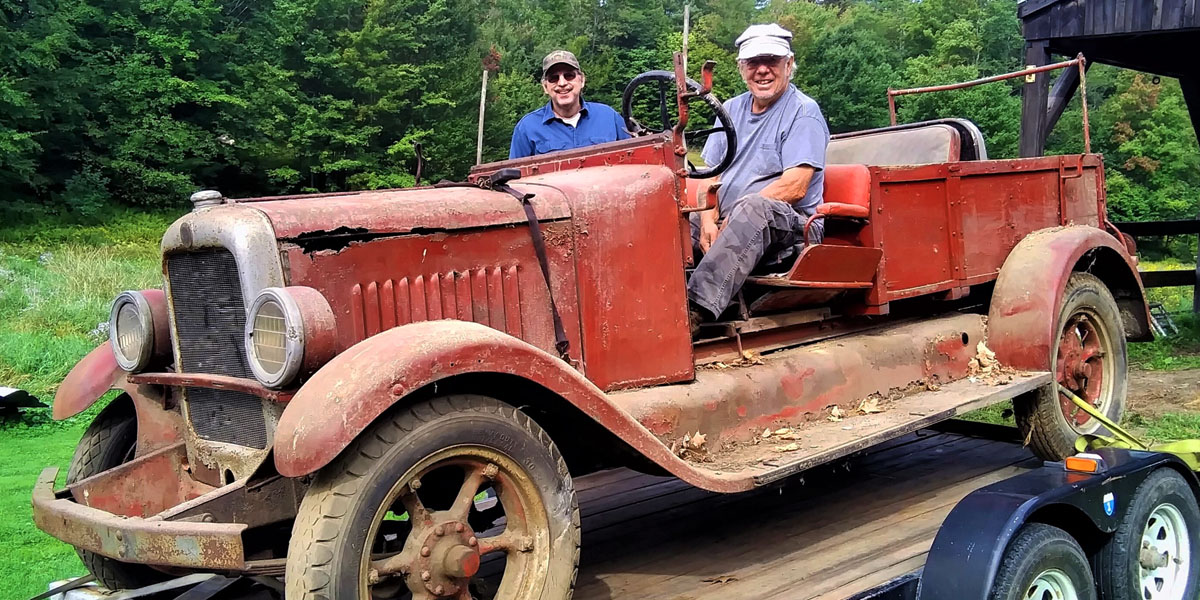 There are two “innocents” in these pictures, and four “connivers”. Dixie the dog is one innocent, can you guess who is the second?

How do you match the joy of a young child tearing into a surprise birthday gift and discovering that it is just what he’s always wanted?

Well, how about seeing a fellow who’s er, well into adulthood, discover that the surprise anniversary gift from his wife is the rusty relic of a 1927 GMC firetruck that he has been lusting for?

So it has come to pass for VAE folks who took part in making this happen for Gary Fiske. The feature truck had been tucked away in Gael Boardman’s shed behind his tractor and some other machinery and under some other miscellaneous goods that simply needed a place to be. Following Gael’s passing, Judy Boardman sought to dispose of some of his memorabilia stuff into appreciative hands.

This was accomplished with a very successful VAE auction in July. The firetruck remained, seen but not spoken for.
Sharon Fiske somehow sensed that Gary would like to own it and discretely let it be known to a few friends that she would like to surprise him with it as an anniversary gift. A plan was hatched, a ruse was devised and some bald-faced lies were told to get the surprise underway. It was so well executed that Gary unwittingly took part himself, by lending his trailer and helping to load it, thinking that Bill Erskine would be the happy new owner.

The tires held air, at least for the day, the wheels turned freely and the relic rolled onto Gary’s trailer. Once the truck was loaded for transport, Sharon was cleverly able to dispatch Gary on a wild goose chase while the conspirators trucked it to Gary’s yard. The surprise was total and joyous to witness. Gary just happened to have room under cover for his new treasure along with all the other vehicles that he’ll get to someday.

There is still much to be learned about the fire engine’s origin and history. Therein lies the joy of owning it. Is it a candidate for restoration? If so, to what? In the mean time, Gary can go out and sit in it and imagine that he’s responding to a fire, at 35 MPH, tops.

From the editor & the proud recipient of this little GMC firetruck…

I want to thank everyone for this really nice gift, especially my wife Sharon. I kind of pride myself for being “plugged in” when it comes to things around me. I have to admit, I was totally off the grid in this case. When people ask how many project vehicles I need, most of the time I say that I need two more and they will take me to 120 years old. I think I am there.

Now to the fun part that Wendell spoke about. First to find the history on this truck and second to find exactly what I have here. Of course, working on it is the frosting on the cake.

As to the history, the first person I contacted was Gary Irish. Gary lives near the Boardman’s and I was hoping Gael might have mentioned the truck to him. Gary had nothing to offer except an apology; you see he is also one of those ’plugged-in’ folks. Gael’s wife, Judy, can only remember that it appeared one day. So, to all you friends and neighbors of Gael Boardman’s homestead, I would like to hear from you if you have some information.

Next is to find what I have. Dodge Brothers and Franklins are a bit where I come from, I know very little about GMCs. A book by the name of “The First Century of GMC Trucks by Donald Meyer claims there were 12,918 GMC trucks sold in 1927. The beginning for GMC started in 1900 with a single cylinder, chain-drive vehicle with a top speed of 10 MPH and a capacity of one ton.

But wait, later in 1927, GMC started building a new model called a T-10 which was a half-ton delivery truck called a “Speed Wagon”. But no, Meyer claims the T-10s had a Pontiac engine and all the others have Buick engines. My engine is a Buick.

My dash plaque claims top vehicle speed is 35 MPH. I bet when I get done tweaking and peaking I will squeeze at least 36MPH out of her, but first I have to un-seize the engine with Gael’s favorite stuff called “Kroil”…….yes!
Can you imagine any more fun than this? I can not.