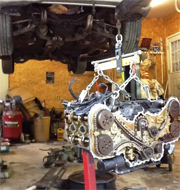 Recently, I had to replace the head gaskets on my Subaru Outback. The car had 205,000 miles on it. Outside of replacing the spark plugs, I have not done anything to the engine.

When I took the engine out, I was expecting to find the engine to be tired after going so many miles. I was surprised to find no wear on the engine. The valves were not worn. The cylinders still had the hone marks on the walls. There was no sludge or varnish to be found anywhere. If I did not know the car, I could have been convinced that the engine had very few miles on it.

There has been great discussions recently about the reduction of zinc in modern engine oil due to the zinc harming the catalyst in catalytic converters, and how this was detrimental to older, flat tappet camshafts and lifters.

I was surprised to find that my Subaru does not have roller camshafts, but rather the older style flat tappet camshafts. The car also has a “shim and bucket” style valve lash adjustment. To adjust the valve clearance, shims are added or removed to achieve the proper clearance. After 205,000 miles I gave the valves (all 32 of them) and camshafts (all 4 of them) a close examination. I could find no evidence of any wear, and all was within tolerance. I had everything checked at the machine shop when the heads were planned, and they confirmed that all was as it should be. I did replace the valve guide seals while it was all apart.

So, with an engine in such good condition, why did I have to replace the head gaskets? Well, the heads were both warped and had to be planed .007″. Why were the heads warped? I don’t know. I asked at the machine shop and I was told the Subaru heads just warp. The good news is this was the first H6 engine they have ever worked on. For comparison, they said that they planed a record 26 four-cylinder heads in just one day.

This car has always had Mobil 1 engine oil, and it has only been changed every 10-15 thousand miles. This confirms what I have suspected for years. Modern synthetic engine oil is remarkable, and proven to prevent engine wear. I have been working on engines for over thirty years. I have been inside engines that looked like BBQ grills, I’ve seen thick sludge, and I’ve seen thick brown varnish throughout engines. I have yet to see any evidence of this type of contamination, or significant wear on engines using quality synthetic oil. Modern engine oil has come a long, long way and todays synthetic oil is nothing short of remarkable.