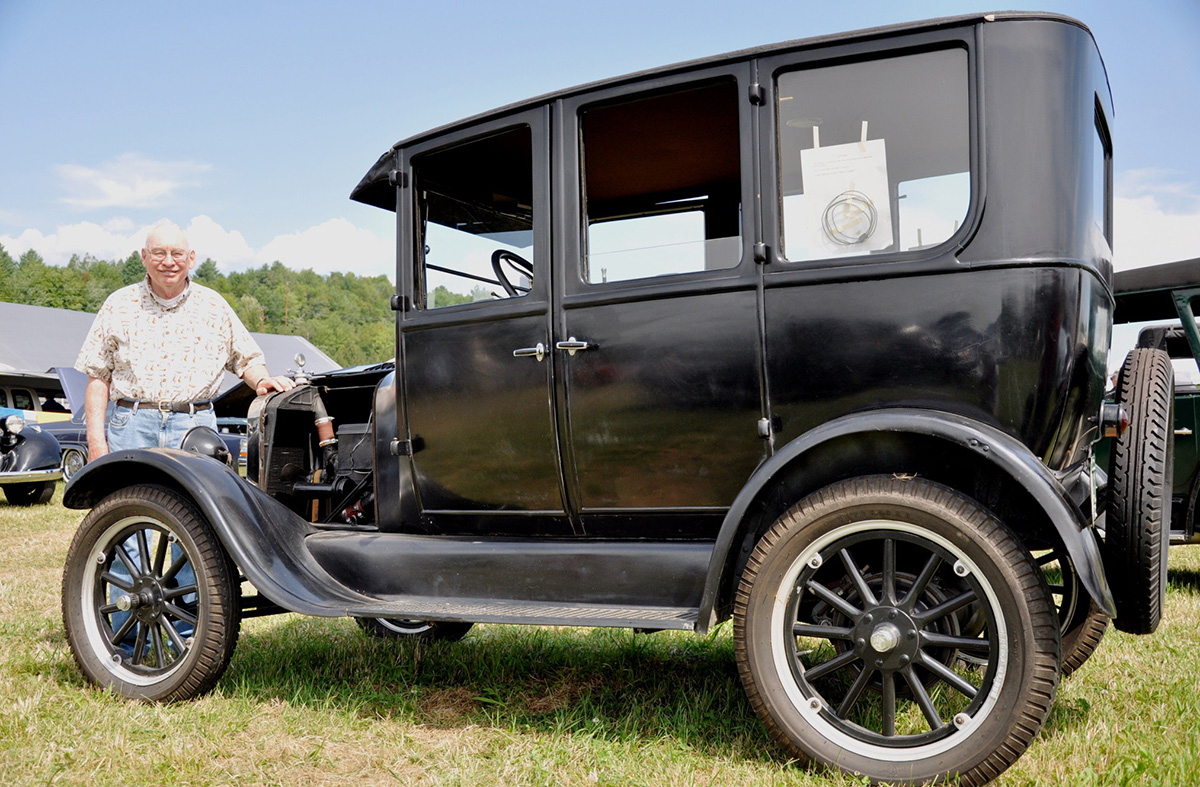 I bought my first T from Herb Gallager of Lyndonville in the spring of ’46 for $20 and a single shot .22 rifle. It was a coupe made into a pickup with no top. My father was mad and later I figured out why. He had been a locomotive engineer from 1904 to 1926 and ‘Engineers’ drove Buicks, Jefferys. Etc., not T’s. Since it was spring Arland Noyes, Wally Davis, Charlie Ladue and I decided to try it out on back roads. When we got stuck Wally would pick up a rear wheel (no fenders) and we would put brush under it. We came to a downhill with a bridge at the bottom that no one had traveled all winter. I gave it full throttle in low. Well, the bands were worn so the low pedal stuck on the floorboard. A replacement push-pull switch was located on the right of the dash. It was all I could do to stay in the road using two hands, no chance to reach the switch or get the low pedal up. I decided to concentrate on not hitting the bridge while the mud splashed on the windshield and Charlie…we and the T made it safely. 30 by 3 ½ clincher tires were hard to find in WWII, so I made adaptors to use ford 600:16 rims on the rear, there were plenty of these tires in the junk pile of Blake’s Garage where I worked. The car was always going ‘uphill’ and I drove it this way through my senior year at LI and started UVM in Janu-ary of ’47. I took all of this last deer season off that year to put in new bands. All the old timers at the garage cautioned me about dropping a nut. I didn’t realize how slippery a well-oiled nut could be and that is exactly what I did…I dropped a nut. If there was a loose nut in the engine and you turned the engine over it would stick to the magneto and good by engine. So I pulled the engine and even though I thought I had it sitting nicely on blocks the engine fell off. When it hit the floor the nut rolled out the starter hole. I hope the old timers thought I knew what I was doing. The car had a water pump so while I had it apart I installed a heater. It helped some but with no top or side curtains it was not too effective. Arland and I hunted that season. One day I came back to the car on Hardscrabble Mountain and there was a deer in the pickup back. I knew Arland could not drive the T. It turned out that Herb Gallager came by and drove it down into the field, the deer was his.

Once the registration expired I had to get rid of the car for financial reasons and some scholarship wording. UVM had a scholarship called the Wilber Fund for Vermont students with a B average. The application was what does your father do? (he was a hotel janitor), does he have a car?, do you?, (no & no…good bye T). How much money do you need, how much have you got, subtract, and pick up the check from the president’s secretary the next day. Shortly after my last school payment in the spring of my senior year (1950) I bought a ’26 four-door sedan for $35 in East Montpelier while hitch hiking to Lyndon Center. This is the car you see in the picture above. There were not many cars at UVM then. If I could not park in front of the closest door of Waterman on Prospect Street things were bad. The President’s secretary saw my car and we ended up swapping rear ends (with $10 to boot) for his Ruckstell. I drove this car from Burlington to Lyndon Center on many weekends. When my folks came by bus for an engineering open house the plan was for them to ride home with me. The Ruckstell stuck in low range and it was a long hot ride, getting home at 1AM, at 20mph. I had an interview with the General Electric recruiter. His comment was that they could use anyone who could drive a Model T. Maybe the T had a bigger influence on my life than I imagined. I got the job and drove this Model T to work on my first day at GE Burlington in 1950, on many anniversaries and my Last day at work in 1988. The car was pretty ragged and not used from 1950 until I got married in 1959. It had been stored outside some. I put in a new battery, water, blew up the tires and drove it from Lyndon Center to Pittsfield Mass., where I started a frame up amateur restoration. I completed this with an engine job after retirement in 1988. Now it is time for another restoration, after all some of the work is over 50 years old.