Started with a seed of an idea to “have our own museum”. During one of the discussions Gene Fodor spoke of a car club in New Jersey that has a “Museum on Wheels”. It was the Vintage Automobile Museum in Beachwood, N.J. (they are the folks whose museum was devastated by Hurricane Sandy just a few days after their grand opening). The idea started a chain of events that started with looking at everything from step vans to even fifty-cent tours of the UPS trucks you see driving around town. Gael Boardman was the chairman of the VAAS Board at the time and probably mentioned the exciting idea a few times at home when his son Owen happened to find a Bluebird bus for sale in the Plattsburg, NY area.

Thus, the picture you see here and on our Wheel Tracks front page. The VAE membership voted to purchase the bus at last November’s annual meeting and the journey was started!

The bus found it’s first temporary home at Duane and Marnita Leach’s home in Fairfax and then after leaving it’s mark (huge ruts in the Leach front yard) it made it’s way to Vermont Technical College to get a “look over” at the school’s auto tech garage. After a few repairs at VTC it moved to Tom Mchugh’s yard for a while and currently it is parked at Wendell and Mary Noble’s home. In the few short months since the VAE has owned the bus it has been cleaned up very nicely, some signs have been made for it’s exterior and some display cabinets have been installed. A tow hitch has also been installed if an old car needs a trailer ride to a classroom event.

It’s first big outing was at the Stowe Car Show where you might have seen it proudly parked by the front gate. It was open to the public in it’s “beginning form” for all to see and to share their vision of how we might proceed in our mobile museum and classroom project. Some visitors thought there should be lunch pails and books around, others thought we should have a gift shop and ice cream bar inside. Another was that we should have videos of past parades and car shows to view. Some advice on outside painting was to leave the yellow and paint the lower area green. Another idea was to do the outside in a vinyl wrap with old cars and car parts.

So now how does the ‘mobile museum project’ go forward? As you can see there are some great ideas and if you have been around the block a few times you know those ideas will give birth to other great ideas. A discussion with a Vermont career center auto tech instructor said it all. When he was told about our plans and how we could someday roll into his facility pulling a trailer with an antique car prepared to show his class “how they did it back then”. His response was that we could have his classroom as long as we would like. During the seventeen Golden Wrench Award presentations this year we met many top notch high school juniors and seniors with amazing abilities. One wonders if being exposed to our hobby if some of those students might get into the lucrative world of restoration?

Now we have to throttle back to the one-step-at-a-time pace. Where will our museum be parked, what color will it be, how will the inside be arranged to best serve our needs, who will drive it through the hills of Vermont? 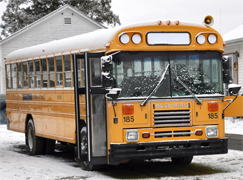 How do we raise the funds to complete our mobile museum? Checking with our treasurer there have been about $3000.00 contributed to date. You will soon have your chance to throw a few coins into the contribution pot. A fund raising campaign is being prepared as we speak.

If you would like to write a check today just write it to the:

(Oh, by the way, you can write your contribution off on your taxes.)