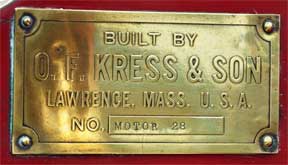 I first discovered the fire truck in 1974 in a shed in Washington, Vermont. It belonged to Frank Bushey, a school teacher from Bloomfield, Conn. Frank had purchased it to use in his Gremlin Camp for Young Boys. Instead it had rested in the shed for 23 years. I had surveyed and designed a pond for Frank at the time. A couple years later I was working on two more ponds in Orange and Washington and I stopped to visit with Frank while traveling by. I inquired when he was going to get the fire truck out and get it running? His answer.. “I’m going to sell it”. I agonized for a couple days and much to my wife, Shirley’s objections I bought it….I still loved her though . The date July 29, 1976. When I went to bring the truck home Frank said he would get the headlights. He had hidden them in a closet under a pile of house-hold goods, so as he said, “old man Miller couldn’t steal them” (A K Miller the Stutz man lived a mile away.) The lights were Gray and Da-vis 1912-13 Cadillac brass. My son, Tim, and I towed it home and began working on it. We tinkered on the motor and had it running in short order. Then began the process of restoring it. We disassembled the body, fenders and sand blasted everything. It was painted and put back together. As fate would have it, the fire chief from East Berkshire, Norm Lavallee, was at the Middlesex Fire Equipment where Tim worked at the time and he mentioned I had their first fire truck. Norm looked up some old pictures of the truck and told me to come up and we could search in the old fire house. We found most all of the old brass rails and fittings that had been taken off the truck when they sold it. What a discovery!!

Each summer Shirley and I would vacation in Maine. In my inquiries about White Kress Fire trucks I was referred to Harold Walker in Marblehead, Mass. Harold knew all the fire departments in Maine that had White Kress trucks and sent me the list. So each year we traveled to different locations and visited with the fire departments. Finally information came out that the truck came from Augusta. With that in hand we came up with old pictures of the truck. The folks in Augusta believe it was their first motorized fire truck.

It was fun to search and find missing pieces for the truck. The hose bracket came from an old Plainfield fire truck. The siren came from Roxbury. I found lanterns and nozzles at flea markets. A good friend from Suncook, NH sold me the lantern brackets I needed.

The steering wheel was an interesting event. When stored under the high drive** to the barn a beam broke one winter and fell across the steering wheel and dash board breaking the wheel into eleven pieces and gouging out a part of the dash. Frank had saved all the pieces of the wheel and I had them welded back together. When it came time to reassemble the wood parts of the wheel I found one was missing. For some reason I was looking over mechanical parts and there was the missing piece on the inside web of the frame. Talk about luck!

The truck is now back in Augusta Maine. I donated it to the Fire Department. I know it’s in a good home and will be well taken care of. I still miss it when I walk into the garage but it was more than I could handle at my age.

* Tom’s Pumper is the 2nd from the left pictured here in it’s early home in Augusta, Maine
** Some folks in Vermont call a ‘high drive’ a ‘wharfing’….it’s the ramp where one would drive a load of hay into the barn “hay mow”. The Picture at the top is of the Hartford Fire Station in Augusta, Maine early in the fire trucks history.