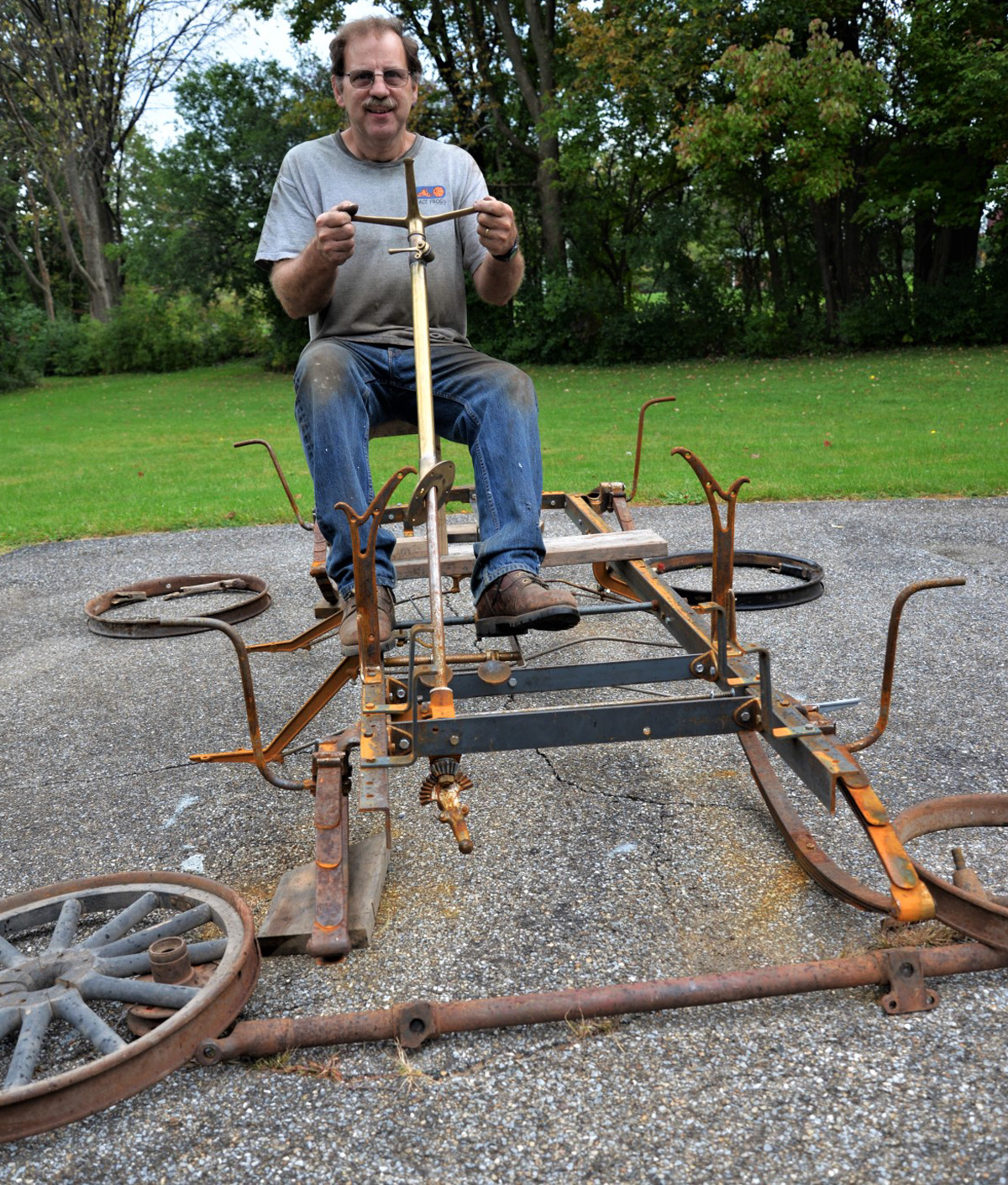 Henry Ford made about One Thousand Model F Fords in 1905 & 1906. It is understood, maybe, thirty-five remain in the world. Two Model F Fords can be found in Bill Erskine’s barn. Bill is pictured testing the cornering abilities of this Model F!

It was over thirty years ago that Bill Erskine found his Model F Ford in Western New York, in a town named Angelica and not far from where he grew up. But, the Model F was not the focus of his attention then. The gent who owned the Ford also had a 1903 Rambler and an International High Wheeler that caught his eye.

So, in normal “Bill Erskine fashion”, he made a deal with the old-gent owner of the Model F. Bill would restore the Model F to running condition in exchange for the other two vehicles. The gent agreed to the exchange, BUT, Bill could only take pieces of the Ford at a time, never the whole vehicle. Bill went home with the Model F engine that day, while the Rambler and the International waited for him to complete his deal.

Some time later, Bill returned the engine. It was restored, after many hours, and boxed very nicely in a wooden crate. He went home next, with the frame. Shortly , after beginning the frame work, Bill had a call from the NY police, it was found that someone had stolen the Rambler.

So, all work on the Ford stopped and in exchange for the work he had completed to date (plus some cash), Bill came home with the International High Wheeler and a 1916 Franklin.

Some twenty years later, Bill was visiting his family (not far from Angelica, NY) and decided to stop by a junk yard in the area. Guess what he found in the junk yard… you guessed it… he found the stolen 1903 Rambler! The Rambler was later purchased by someone (not Bill) from the junk yard and a settlement was made with the original owner.

Now, fast forward 27 years. Bill had stopped by a few times over the years, hoping to make a deal on the old gent’s Model F, but besides a nice conversation, he always went away empty handed… until three years ago. A deal was finally made and Bill became the proud owner of the ‘05 Ford. The engine was still in the crate that he had made for it but the body had deteriorated to the extent that it was unusable. A lot was missing and what was left could only be used as a pattern.

Bill made body patterns after taking many measurements from a Model F at the Ford museum. He then combined his measurements with two partial sets of patterns he had borrowed from people in Texas and Ohio and started building the wood body. About 120 hours of work in his wood shop produced his first body. It is important to note ’his first body’ because someone in the Midwest had heard about the project and Bill agreed to build a body for him also. The second body is what you see on the front page. When the gent who wanted to buy the body changed his mind, Bill decided to continue, and build a frame for the second Model F, and close to 100 hours of work later, the steel work was completed. That is what you see him sitting at on the front page. He has found a second engine and most of the parts needed for a complete 2nd vehicle.

Maybe the model F count is now 37, because of Bill Erskine’s creativity!

His plan is to use the first body for the original frame and engine. He hopes to sell the second Model F Ford to help lesson the amount he has invested in the two projects. There might even be a Model F for sale in his Hershey space next October. Some of us will need to travel South next Fall to find out!