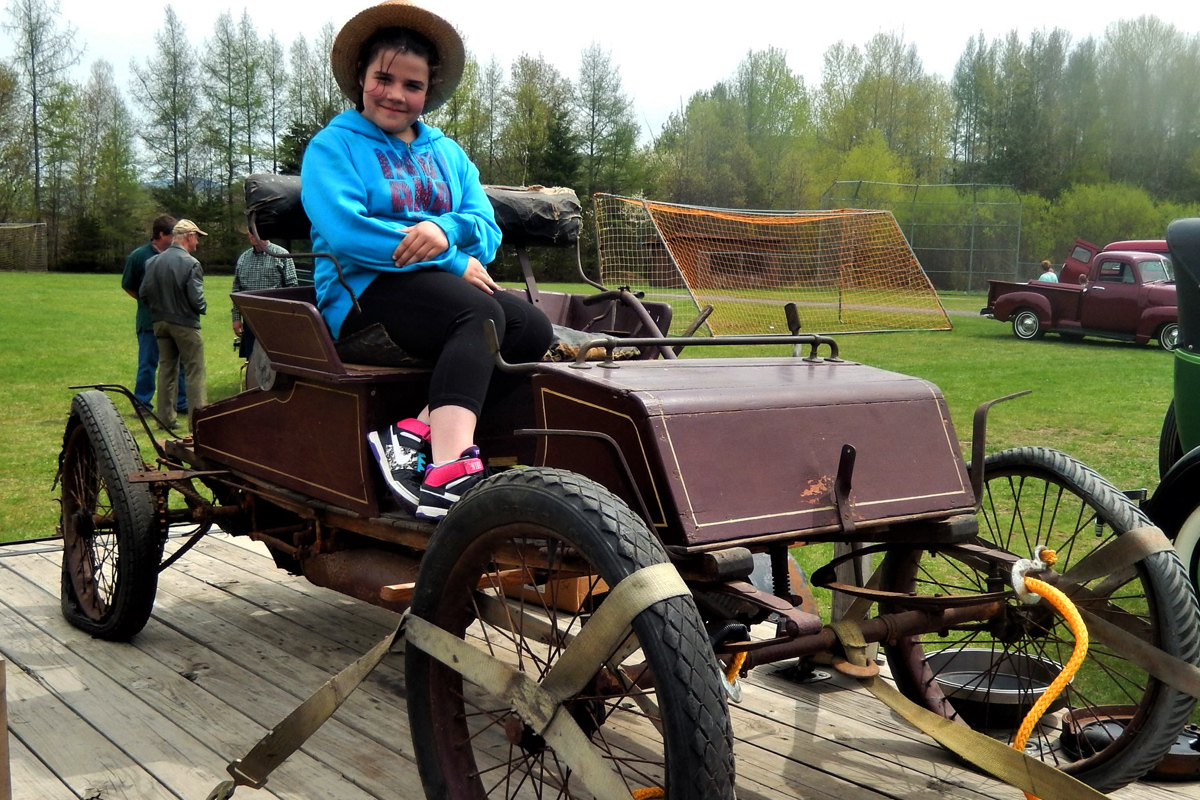 The 1906 Orient Buckboard continues to make history in its quiet way.  Pictured here is the Orient introducing itself to the school children of Island Pond in May of 2015. Sorry, but Wheel Tracks has no name for the pretty young lady, seated. Left is the Orient’s engine being restored today in a machine shop in East Fairfield. Will we see the Orient under its own power in 2020?

Indeed, the 1906 Orient Buckboard  continues to make history in its quiet way.

It was July, 2010, Gary Olney’s Orient Buckboard made its way to Wheel Tracks. At the time the Buckboard had a lonely corner of a rented barn in Derby, Vermont. There was a visit to a small car show in Island Pond, the front page pictures a young lady sitting in the vehicle’s 114 year old seat.

Today, the Orient has a place of honor at Gary and Nancy’s home in Derby Line. The tires are still flat but there is a plan! The engine has been removed and sits in Dennis Dodd’s shop in East Fairfield. There is a plan to get it run-ning, on the shop stand, then the rest of the vehicle will be retrieved to reinstall the engine. From there, the other small problems will be tackled and the Orient will have a new life of car shows and short parades.

The engine has a carburetor but most of its innards are missing. Dennis will be making new valves since it is impossible to find factory valves, also a cracked exhaust valve seat needs to be addressed. He has found the ignition timer is still in good condition and has it set for running. The bottom end and the cylinder/piston also seems to be in working order so he has decided to go after the other items that need attention. That attention will cover the exhaust routing, new gaskets, possibly the valve sleeves and what has already been mentioned. He says the hardest task is to follow Mr. Olney’s instructions and leave the engine’s patina as is. We all love to make things look brand-new, but Gary’s hope is the Orient will basically look the same when the restoration is complete.

Dennis has also found the engine is a late 1905 model. It is most likely the original engine, it is just that the factory had probably not made the switch to the newer engine when they sold this vehicle. Most manufacturers of the time added changes throughout the year and was not into today’s New-Model-Year mentality of today.

There are some mysteries we have been unable to find answers to but isn’t that exactly how it should be?

This Orient Buckboard was built by the Waltham Manufacturing Company on Rumford Avenue in Waltham, Mass. Thanks to Bill Sherk’s article in ’Old Autos’, a publication printed in Bothwell Ontario, a few of the mysteries have been solved. The auto…with it’s Massachusetts number plate…… made it’s way from Waltham to Antigonish Nova Scotia when a jeweler purchased it (date unknown). The story goes that the jeweler would often turn to swearing as he turned the crank because the car was so hard to start.

At some point the jeweler made arrangements to store the Orient Buckboard and a 1912 Studebaker in an area barn owned by the grandfather of Mr. Gordon Penny. When the Studebaker was removed it is said the Orient was left as payment for storage. When Gordon was 14 years old in 1945 he found the Orient in his grandfathers barn, the Massachusetts plate was still attached. He pulled the Orient out and got it running.

The story continues……..in the early 1950s Gordon sold the Orient, in running condition, to Mr. Harry Olney of Springfield, Vermont.

Mr. Gordon still resides in Antigonish, Nova Scotia and when he was interviewed by Bill Sherk he said he thought the Orient was now in Maine someplace. Well, guess what, the Orient resides in Derby, Vermont and is owned by Harry Olney’s son Gary… the Orient still has it’s Mass.1908 plate #0237K.

There were about 2500 Orient Buckboards built and it is estimated 57 exists today, of which 45 are in the United States. The 1906 Orient was sold new for $440 and was the first to have what is called Friction Drive, a wheel and disc that allows an infinite variation of speeds forward and reverse also allowing for much less vibration when driving. Top speed is 35 MPH and if you want to enter a race, special ’racing’ sprockets can be installed to reach up to 40MPH. The engine produces 4 horsepower and is air cooled. The car weight is 525 pounds with a wheelbase of 80 inches. The wheel track is 42 inches but can be changed to 56 inches which would allow it to fit into the ‘standard wagon tread’.