On the left we have a 1913 Board-track racing Indian motorcycle  – On the right, a 1910 Harley Davidson motorcycle 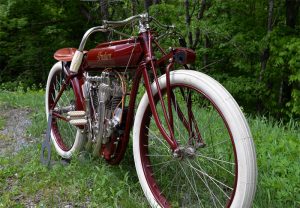 This beautiful 1913 Indian board-track racing motorcycle is owned by Skip Weeks of Collinsville, Connecticut. He found a few parts of the engine for sale and decided to pass. Then a call came and he was told 95% of the rest of the engine parts had been found and it was more than Skip could say no too. A friend helped him put most of the engine together and Fred Gonet was given the task of the final tweaking. Fred has a restoration shop in Proctorsville, Vermont. Then, Skip found a business in Canada that built reproduction chassis and asked Fred to put it all together… and this is the results. 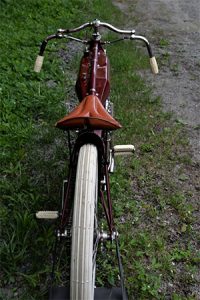 The neat thing about the machine’s destination is not a board-track but Skip’s living room where Wheel Tracks understands it will join a few other motored antiques. Track racing served as the principle venues for motorcycle racing in America. By 1910, rival companies had started to overtake Indian on the wooden speedways. Oscar Hedstrom who designed the Indian motorcycle in 1900, returned to his drawing board. His goal was to design a new motor capable of regaining the lead for Indian. The result of the engineer’s effort was an overhead-valve design; however this could not withstand the extreme temperatures of a high-speed race. Hedstrom’s solution was to decrease the size of the valves and add more of them. Instead of the usual two valves in each cylinder, Hedstrom calculated that four smaller valves would be better able to dissipate the heat. His theory turned out to be correct, and the overhead-valve configuration also proved to be more efficient. 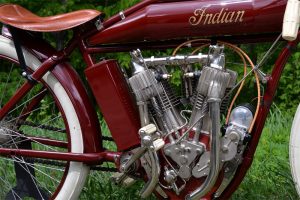 The Indian 8-valve debuted in 1911 and was immediately successful on the pine-board tracks. In 1920 an Indian 8-valve set an official world record for the mile, achieving a speed of 114.17 mph, and in 1926 an updated version of Hedstrom’s landmark design was clocked at 132 mph, setting another world record, which would remain for the next 11 years. It is not known how many Indian 8-valves were produced, but approximately six are known to have survived. 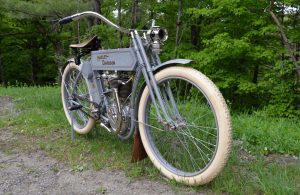 Wheel Tracks had the great opportunity of having these two motorcycles in one place, on a sunny afternoon and wanted to pass a little about them, on to our VAE members. On the left is a 1910 Harley Davidson motorcycle. This is not a racer, but a beautiful road bike. It is a perfect replica of the original owned by Fred Gonet.

Harley-Davidson, Inc. is an American motorcycle manufacturer, founded in Milwaukee, Wisconsin in 1903. In 1910 there were 110 motorcycle brands in the United States and 107 years later, Harleys are still alive and well.

This Harley is a 1910 Harley-Davidson 30ci Model F. It has 28 X2.5 tires with an Eclipse Knockout front hub that allows the tire removal by taking only one nut off. You start the 4hp engine by pedaling with your feet until the engine fires then engage the rear wheel by pushing a hand control forward to tighten the leather belt. The brakes are the normal “coaster type” on the rear wheel. 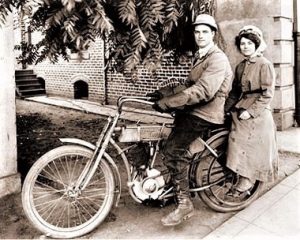 The new price was $210.00 and you could order one with one-quarter down payment and the balance due on delivery.