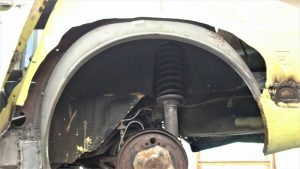 Absent any questions this month, I will give a brief Z car update. The car is a 1972 Datsun 240Z receiving a total restoration. The car had significant rust in the lower body panels and floor. The left side was much worse than the right side.

Work on the left quarter panel is progressing. The rusty inner wheel well was totally replaced. This involved drilling out the spot welds and removing the old panel. Fortunately, well made replacements are available. The new part was an exact fit. With the new inner wheel well in place, the repair of the outer quarter panel could proceed. 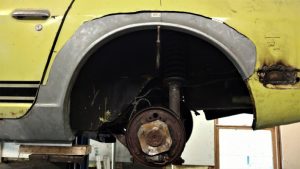 We obtained a Tabco rust repair panel. This panel is made of nice thick steel, but the fit is poor. I like to keep as much of the original car as possible. We went just above the rust, cutting the metal out, just above the rust area. We only cut out the rusty part of the quarter panel, and will weld in the replacement panel.

When fitting a weld repair, I do not like straight lines or sharp angles. I find it easier and stronger to have the weld seam a series of curved lines.

The repair panel was carefully trimmed to fit, and will be welded shortly. It will be spot welded along the wheel well, as original. I may also use two part panel epoxy, this will produce a much stronger, more weather tight bond than it had at the factory. 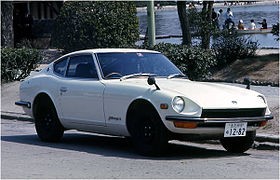 Editor’s notes….David and son, Sean, will have the Datsun 240Z at the Shelburne Show on Father’s Day weekend. A beauty of a car, as witnessed in the file picture to the left, is outstanding. Hiratsuka, Kanagawa in Japan is where they were built from 1970 to 1973. The 240Z was meant to compete head to head with the MGB-GT and won the race with its great de-sign and relatively low price.