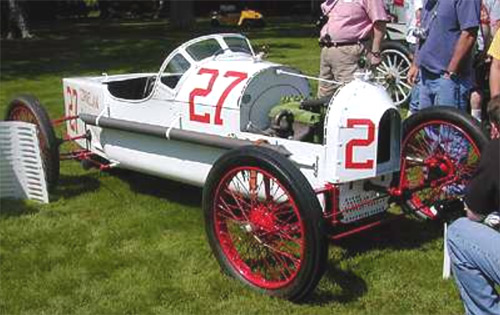 …in some people’s blood… witness stock car racing as the world’s largest spectator sport. How about “blood” being in racing?

In 1915 Howard E. Blood got into American auto racing big time. To get his new cycle car off the ground, Howard had big plans for his little car. The car was the Cornelian, a cycle car of 500 lbs displacing 103 cubic inches (powered by a Sterling engine).

The big part came as Howard got Louis Chevrolet, recently of the Chevrolet Automobile Company and a seasoned and successful race driver, to agree to race the new car. The cycle car was well made and sported a uni-body, independent rear suspension and a “suicide front axle”.

Undaunted by it’s size and power, Louis qualified for the 1915 Indy 500 with Howard’s jewel. With a qualifying speed of 81 mph, the Cornelian was in. History reports that Louis was having a great, albeit little, ride when on the 77th lap he broke a valve and had to retire. It is interesting to note that the Chevrolet car grew out of the Little Motor Company… and that the little Cornelian grew out of Chevrolet’s race.

Post-race orders looked good for Howard and his petite product but after production of 100 units, the writing was on the wall and the Cornelian dropped from sight. Should you doubt this story, check the museum at Indy Speedway. The smallest car that ever raced at the Brickyard 500 is there, uni-body and all.