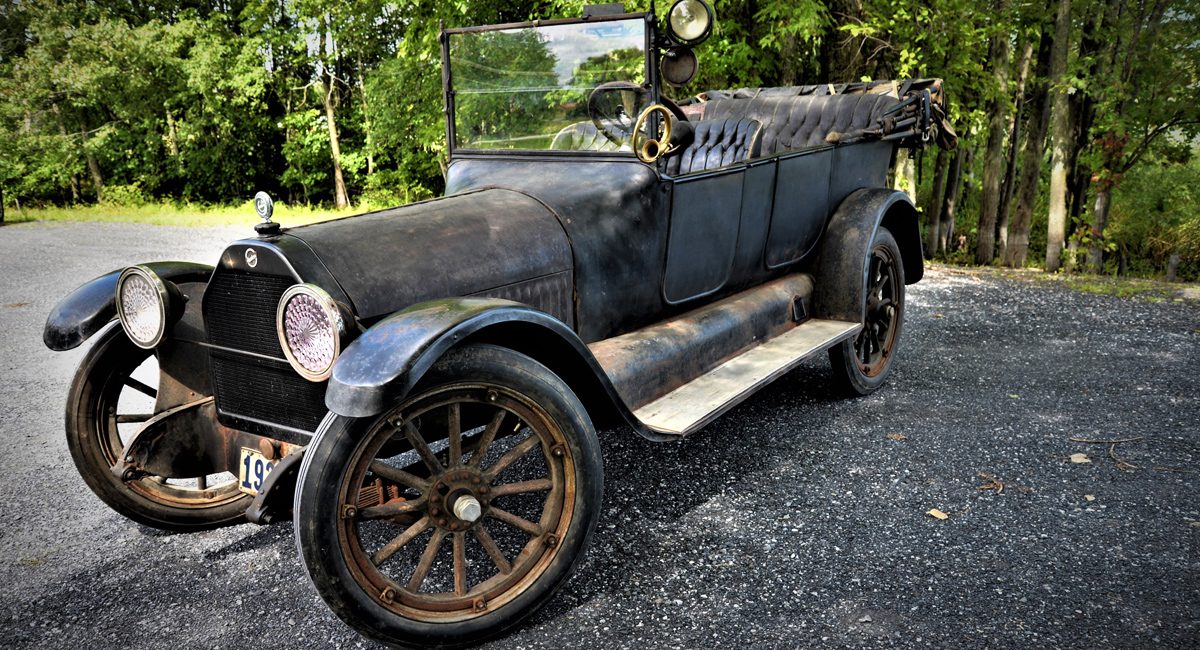 A Saturday Journey… “We are going to Hong Cong and then to the zoo.”
A ride in an old friend! Ken Cota’s ‘17 Studebaker is still in service at 102 years old!

This 1917 Studebaker Touring was the feature car in the March 2013 Wheel Tracks. Gene Towne of Milton had purchased the car from Dave Maunsell in Greensboro that January. You can still find the Wheel Tracks issue on our website if you would like to re-read the article. Dave, Gene, Wendell Noble, Gael Boardman and Gary Fiske were involved in getting the Studebaker to it’s new home that day.

You can see why this visit with the old car was a bit of a reunion. We have lost two of the folks who shared that day. Gene died in 2013 and we lost Gael just a few weeks ago.

The Studebaker, however, is still going strong….and isn’t that exactly the way it should be? We all worry about what will happen to our old cars as time passes, maybe this old car is telling us NOT TO WORRY, just enjoy them today and they will take care of the future.

Another VAEer by the name of Pevy Peake and Dave had traveled to Michigan in 1995 to see the Studebaker and ended up bringing it home to Vermont. Gael and Dave did some engine work on the car and it traveled much of the Northeast Kingdom the next eighteen years. Gene was able to enjoy the car for just a short time, when he sold it to Ken, where it got a new cone clutch, a new windshield and a tune-up with some shiny new spark plugs. It is now, happily, traveling the Champlain Islands.

This 3000 pound Studebaker is one of only 39,686 cars the company made that year, according to the U.S. Automobile Production Figures manual. Commercial production had decreased drastically because of the war, the U.S. government had, by that time, taken over more than 85% of the South Bend factory. By Fall of 1918, all commercial production had seized, and 100% of the factory production was for the war effort. Ken Cota’s Studebaker is a survivor of only a few from 1917. There were only about 18,000 cars produced in the next, making 1918 Studebakers even more difficult to find.

Studebaker’s main business before 1908 was farm wagons and other related horse drawn equipment. Then a car company by the name of EMF began production in ’09 and Studebaker bought stock. Within four years they owned the EMF automobile company. For many years, the company continued their business in horse drawn equipment while building automobile the same time. In fact, in 1914, they accepted an order that was said to be the largest ever placed. WW1 had begun and Briton contracted Studebaker to deliver 3000 wagons, 20,000 sets of harnesses and 60,000 saddles. The order was completed and shipped out four weeks early. While this order was being filled, Studebaker also built and shipped 475 automobiles to Russia for the war effort.

If only Ken Cota’s Studebaker could tell us about it history……..