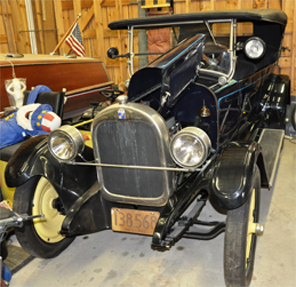 You are looking at the lonely life of Pierre Pepin’s beautiful Blue 1922 Durant touring car. Pierre purchased the car a few years ago at the Stowe Car Show in the car corral. He traded a model A, or was that two, plus a little too-boot. He is a little sad that he has never had it on the road even though it appears to be ready to roll down the highway any time you ask. Pierre’s Durant made it’s way from New Jersey in 1997 to East Chelmsford, Massachusetts. From there to Stowe and then it’s present very quiet life in Colchester.

The Durant was a make of automobile assembled by Durant Motors Corporation of New York City, from 1921 to 1926 and again from 1928 to 1932. Durant Motors was founded by William “Billy” Durant after he was terminated as the head of General Motors. Billy Durant’s intent was to build an automotive empire that could one day challenge General Motors. The Durant automobile is considered to be an example of an “assembled” automobile because so many of its components were obtained from outside suppliers. Pierre’s 1922 vehicle is powered by a four cylinder Continental engine. It is an overhead-valve type, fully encased. Bore: 3-7/8″, stroke: 4¼”; S.A.E. rating 24 horsepower; brake horsepower at 1800 r.p.m. 35.

Durant vehicle production was suspended for the 1926 and 1927 model years. When the Durant was reintroduced, the car was redesigned and powered by a six cylinder Continental engine; some of the early vehicles were marketed as the “Durant-Star”. Bodies for the vehicle were supplied by Budd Company. In 1930, some Durants were built with all steel bodies, also supplied by Budd. Durant Motors was found insolvent and automobile production ended early in 1932.

Wheel Tracks can not find a Durant that has been for sale in Hemmings Motor News in the past 6 months and when going on the internet none can be found for sale there either. The “Durant Motors Automobile Club” website offers a lot of information but again, Wheel Tracks found none for sale. Does that mean Durant Cars are hard to find if you would like to own one?