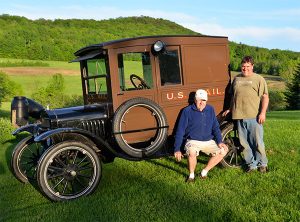 Dan Noyes and his dad, Bob,  with their 1923 Model T Mail Truck that has been in the family for five generations.

In 1901 or 1902, Fred Noyes and his horse Ned delivered their “Rural Route 1” mail in South Sudbury, Massachusetts (note picture to the right). 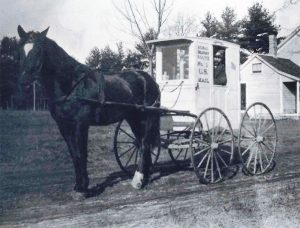 In 1923 the route was 28.6 miles, Wheel Tracks was unable to find if Ned and Fred had that distance on Rural Route #1 to deliver mail. Using information from Vermont area routes, during that time the 28.6 miles was somewhat normal when horses were used. In the winter time the postman would stay over night along the route somewhere …mostly wherever the best meals were served. 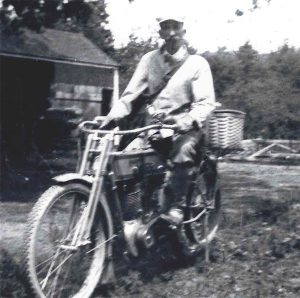 The cost of the Harley was $185.00 from New England Motorcycle Company in Boston. Wheel Tracks believes the Harley model was a 30 ci F-head single cylinder engine. It was belt driven with battery ignition and was 4.34 HP. For you who know Harley motorcycles, using the vin number, is this correct and another question….can this Harley be located using it’s vin number if it still exists?

You can see from the picture of Fred on the Harley that he had a basket on the back plus a shoulder bag to carry his load of mail. 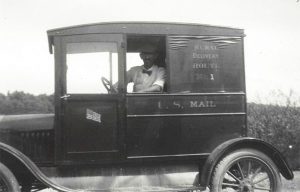 Then… in 1923, Fred Noyes started using his 1923 Ford Model T mail truck. It is believed Fred bought only the Model T chassis because in May of 1922, he purchased a “Light Runner Rural Mail Wag-on” body from Harrington manu-facturing in Peoria, Illinois, to make his mail truck complete. The body cost him $160 plus he added a new front spring for $1.40 and a set of rear fenders for $6.00. 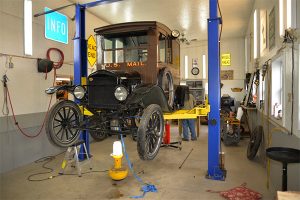 Fred Noyes’ last day of delivering mail with the “T” was in 1931, a very long time, thirty years, of knowing his friends along Route 1 in Sudbury, Mass. 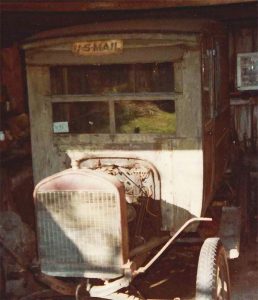 Today the Mail Truck is owned by our VAE Chairman, Dan Noyes, Fred’s great-great grandson. Dan’s dad, Bob gave the truck to him a number of years ago after having the engine rebuilt and restoring the rest of the truck. The 5th generation, if you are counting, would be Dan’s son Ian Noyes.

The picture here shows the truck as it was sleeping in its barn after many years of being ignored and before Bob Noyes decided to restore it.