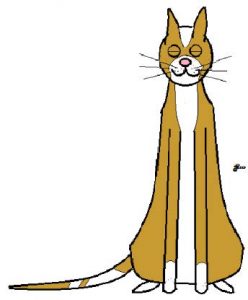 If you are reading this and are not a “cat person” do not bother to continue. But, if you tolerate them and even love them, read on.

For several months this winter I was feeding two feral cats, one female and one male. The male decided that inside the house would be better than outside, so we took him off to the vet for a checkup and sex “adjustment”. Henry became our second inside cat. He and our first cat were not exactly copacetic, but adjusted, mostly. 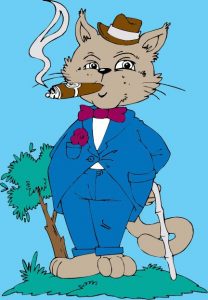 In the middle of May we went to Colorado for our grandson`s high school graduation and then for a visit to the Grand Canyon with our daughter. When we returned home, we discovered that the female cat had delivered five kittens, all of whom were living in our wood shed in and among the stacked furnace wood. Of course they were all cute – three calico, one gray, and one black. Who was the Dad??? No idea at all. In the last week of June, our daughter, grandson and his girlfriend came for their annual visit, to be in the Milton July fourth parade and to ride in a classic car. Meanwhile, it was becoming ap-parent that we could not keep all of these kittens and Mommy Cat. How do you get five kittens that you can’t even catch, into adoptive homes? Our daughter-in-law demonstrated the wonders of social media to us by putting their pictures on Face Book. The word was out to the world that we had these amazing possible pets to give away. About this time, our grandson and his friend had to return to Colorado, then our daughter’s significant other arrived with his two children and we all tried to catch the kittens as we now had people clamoring for them. We managed to catch three with only a little patience, deception and speed, and handed them over to some very happy people. One lady even decided she wanted two. Next we needed to catch the last two and Mommy cat. Finally after much effort, we caught the last two kittens. Who would have thought that a cute little kitten could be so vicious? Wendell’s hand is healing and nobody has shown symptoms of cat scratch fever yet. A lady wanted the little terror so badly, she drove three hours from New Hampshire to get it. 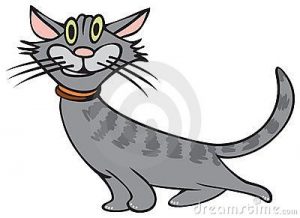 Now we “just” had to catch the mother, so we put out a Have-a-Heart trap, put food in it and hoped for the best. The first night we caught a raccoon which our daughter insisted we release. The second night we caught the same raccoon again. Wendell says it died of cardiac arrest, all very sudden and unexpected. The third night we caught a very large Tom cat that we have never seen before. He was the wildest thing I have ever seen, bounced off the garage walls and made a break for it. That might solve the mystery of who the father is. At one point, I thought I had trapped the mother in our garage, but she managed to slide under the garage door and get away again. We are still trying. So, our saga is not over – we still need to catch Mommy cat and take her to the Humane Society – may have her spayed first, but it may be too late. Ah, CATS!!!!! I’ve gotta lov’em!!