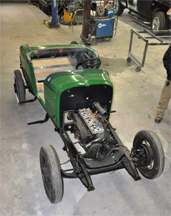 The picture here was taken in Wendell Noble’s barn in Milton, Vermont about a week ago. As you can see much more work remains but it should be easy to see the exhaustive work that has been done.

Resurrecting an old car takes determination, planning, a lot of love and simply one step after the last until it is complete; Wendell Noble is on that journey with this 1930 Chrysler Roadster CJ (Chrysler Junior). Wendell had completed the wooden sections of the body using mostly rotted parts as patterns that he found at a location in South-ern New England. He then attached the steel ‘skin’ with screws and nails; just like the facto-ry did it in 1930. The CJ body arrived at John Johnson’s body shop in Enosburgh (Mountain View Autobody & Sign Design…check out the business card on page 14) last Fall for the finish paint work. The correct paint color was found, after a lot of research and 85 to 100 hours later the beautiful green finish with a darker green trim was completed (see page 16). Here is a part of the process at the body shop…

Wendell then brought his frame to the shop and everyone was involved in very carefully placing the body on it. Speaking to John Johnson later, he mentioned the work on Wendell’s car would have cost at least another 25% if it needed to be returned in a short or specific time. Having the car for these 11 months allowed him to bring it out when the shop was not busy instead of having his shop tied up with this one project. Something for all of us to think about when we send a project out.

So, where did Wendell get this 1930 CJ? It came from a VAE member who lives in the North East Kingdom, Dave Maunsel. Wendell got the car basically as a collection of parts and pieces, just like Dave had gotten it some 34 years earlier from a gent in Saxton Rivers, VT. Dave had collected additional needed parts while he had it along with hav-ing the engine rebuilt by Tri-Town Automotive in Brattleboro. Dave did work on the frame, hired a fellow to rework the doors and found a friend of Pevy Peake’s to do body work on the cowl, hood and rear deck. As the repaired car parts returned to the Maunsel home they found many places for storage….over the garage, in the cellar and even under some beds. When the collection of parts arrived at Wendell’s home it was discovered the doors were missing. Dave found them three days later in an upstairs closet.

Dave has always loved the Chrysler CJ since he had a 4-door sedan in the 60’s while attending UVM in Burlington. He bought the 4-door from a Shelburne dealer by the name of Henry Parker and drove it for 15 years. When asked about the best feature of the car Dave said the Lovejoy shocks were probably it. The ride is great and his car never breaks down.

So when Dave heard about the CJ Roadster for sale in 1979 he had great plans to be driving one again. The day Dave purchased the col-lection of parts there was no paper to be found to write a bill-of-sale so instead of paper a hub-cap was used. The Saxton River gent turned out selling what he called a “complete car” with a few important parts missing and no matter how hard Dave tried to get the parts he was not successful.

Dave was later able to find what he needed for parts in Monticello, NY; a rumble seat lid and many of the rear steel body parts. Asked where the bill-of-sale hub cap might be and Dave said it got miss-ing years ago.

You can see in the picture to the left the Chrysler CJ is now continuing it’s restoration journey. Finish assembly, the electrical, the upholstery, some chroming and maybe even a new top. Dave Maunsell said, in jest, that he should have included in the sale agreement that he be allowed to have the finished CJ to drive for three weeks…..wouldn’t that be a hoot!