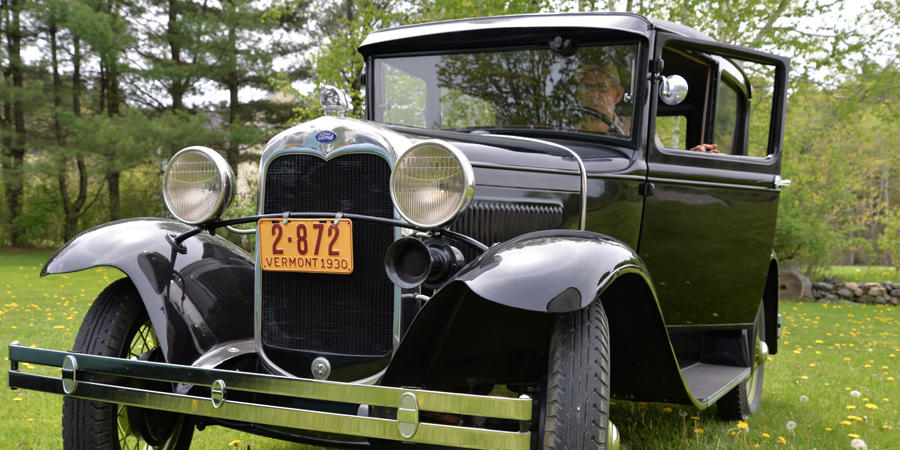 Does anyone know why Henry Ford decided to call this Model A a “Tudor“? Read on for a couple of theories… 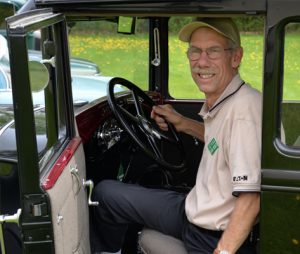 Donald and Anne Pierce found this 1930 Ford Model A in the 2015 VAE car show “Car Corral”. The purchase took them back another 25 years, toward the beginning of the auto era for them. Their oldest at that point was their ’55 Dodge panel Truck. Don’s Model A was restored by John and Chris Center of West Rutland in the 1980s. Don purchased the car from Bill Pinkham of Monroe, New Hampshire. He had wanted an older vehicle and is very happy with his Ford choice. It’s a very reliable car, he says.

The Ford Model A was the second huge success for the Ford Motor Company, after its predecessor, the Model T. First produced on October 20, 1927, but not sold until December 2, it replaced the venerable Model T, which had been produced for 18 years. This new Model A (a previous model had used the name in 1903-04) was designated a 1928 model and was available in four standard colors. 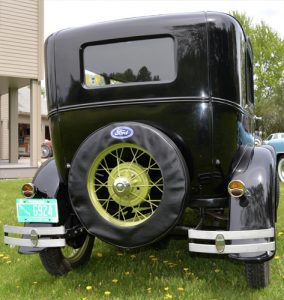 By February 1929, one million Model As had been sold, and by July 24th, two million. The range of body styles ran from the Tudor at $500 (in grey, green, or black) to the Town Car with a dual cowl at $1200. In March 1930, Model A sales hit three million, and there were nine body styles available.

Model A production ended in March, 1932, after 4,858,644 had been made in all body styles. Its successor was the Model B, which featured an updated 4-cylinder engine, as well as the Model 18, which introduced Ford’s new flathead (sidevalve) V8 engine. 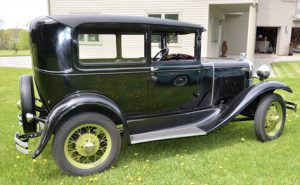 Don is our VAE treasurer and in his spare time operates three businesses. There is Melody Electric, his residential company and Middlesex Electric, his commercial electric company and finally Kerin’s Sign Service. Don started his electrician career in 1973 as an apprentice and got his journeyman’s license in 1977 and his master electrician’s license in 1979. In 1983 he started his own business. Don’s wife, Anne, is in her 28th year as a court reporter in the federal court house in Burlington. Wheel Tracks was told Anne has not driven the Model A yet, maybe we will see her driving it at one of our events this summer…

Footnote… What is the difference between rated horsepower (HP) and brake horsepower (BHP)?

Horsepower was figured “back in the day” when, mostly, four legged creatures were used.

Invented by James Watt, one horsepower originally was measured by the amount of work, that a horse lifting coal out of a coal mine, could do in a minute. Back then, one HP equated to 33,000 foot-pounds.

So, what is BHP? Well, if you take all the items off the car that the engine needs to power, like the transmission, the water pump, the generator… everything , you have an engine with no work to do and all kinds of extra power. That is brake horsepower.

This Model A Ford needs 16 of its horsepower, out of the 40 HP it produces… just to sit and idle.

You pick… Henry Ford used the Tudor name because…