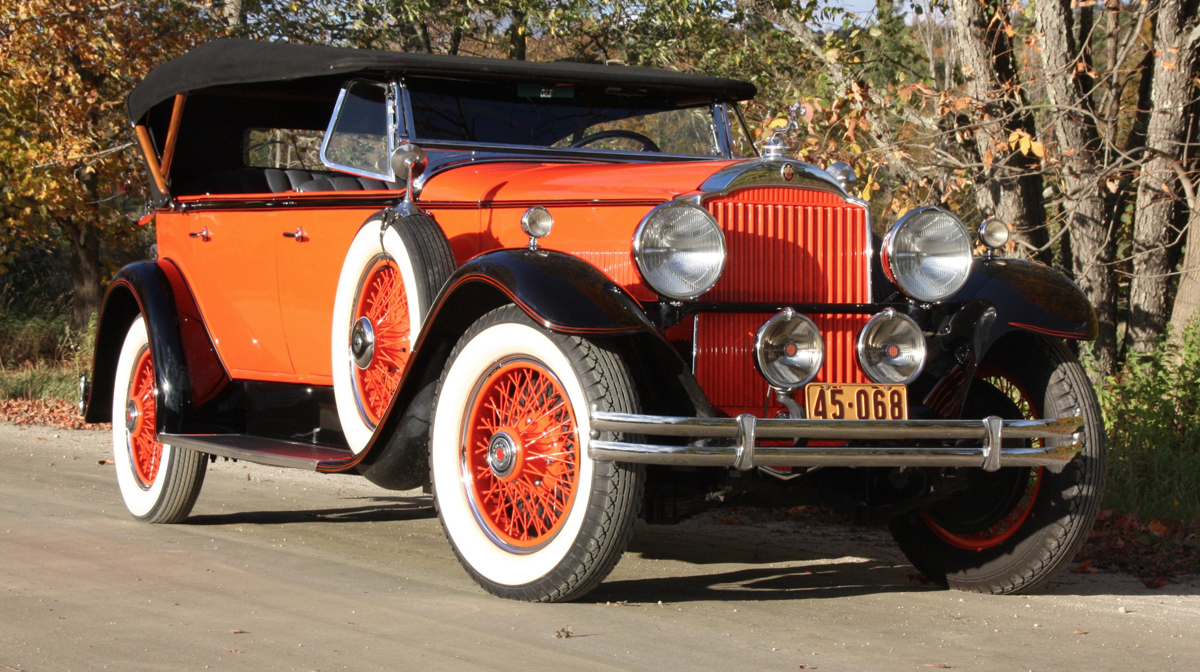 Gene and Gina Wescott gets a visit from Hemmings. Hemmings wanted all the details on the Wescott’s Beautiful 1930 Packard Standard Eight.

Gene and Gina Wescott’s Packard looks a little different in one of its former lives. She is pictured here in 1996 when the couple purchased her from the estate of Dr. Carlos Otis. The Doctor practiced for many years in Townshend, VT. and was the founder of Grace Cottage Hospital in Townshend.

Max Brand was an auto appraiser and a friend of the Wescott’s through “The Yesteryear Car Club”. Max let Gene know about the upcoming Packard sale and that began the next chapter in the life of this wonderful car.

One of Gene’s first tasks was to remove the original lacquer paint and after many hours using paint stripper and sand blasting, the task was complete. The beautiful paint job you see on the front page was done by Eric Lanning of King Ferry, New York.

Many of us know the Packard’s upholsterer, and that is Dick Hurd of Springfield, VT. Many additional hours have been spent during the last 24 years to bring the Packard into its current life, witnessed by the picture on our front page.

“Hemmings Motor News Concours d’Elegance” began in 2003 in Lake George, NY. The Wescott’s thought it would be fun to enter their Packard for the 2018 gathering and that was when Hemmings first heard about the car. As Gene said, the car could never compete with the “big boys” in a competition from all over the nation like this but, they did get the Reliable Carriers Award Classic Trophy that August. The three day event was a lot of fun for Gene and Gina.

In 2019, Hemmings Classic Car Magazine contacted the Wescott’s and asked if they could feature the 1930 Packard in the magazine. Their photographer, Dave Conwill arrived on October 4th for the three hour photo shoot and the rest is history. You can find the Packard story on page 44 of the January 2020 issue. One of Gene’s comments about the photo shoot was how Dave Conwill didn’t mind getting dirty. The very low shots that you see, were taken with the photographer lying in the dirt road on his stomach to get that ‘magic shot’!

The Hemmings story, very interesting, compares the car with all of the other comparable cars of that year, that were competitors. The story also does a great job placing the Packard into the great 1930 stock market crash. According to “ The Standard Catalog of American Cars” the company had built over 41,000 cars in 1928 and another 43,000 in 1929. The 1930 production showed the affects of the crash with only 28,000 built.

The 733 came in ten different body styles from the roadster to the limo. The engine produces 90 HP and the car weighs about 3900 pounds. The Wescott’s have put 3000 to 4000 miles on it and Gene says it loves to travel 40 to 45 MPH. They have basically done nothing to the engine. It is believed some engine work was done back when the doctor had it and it still climbs the hills like a champ today.

One interesting call has come from California because of the Hemmings story. The gent who called had moved West in 1951 and told about his dad being the bookkeeper for the Packard dealership in the Burlington area while he was growing up. He had a chance to drive many of the Packard’s from this 7-33’s period. He remembered a local musician traveling to Rutland for a concert in his Packard phaeton. His memory of the musician driving up to the concert hall and retrieving his huge base instrument from the car’s back seat stays with him today. We VAEers are lucky, as we will be seeing the Packard in many of our upcoming events. Now that we know a bit of its history, we will be looking a little closer at her beautiful lines.