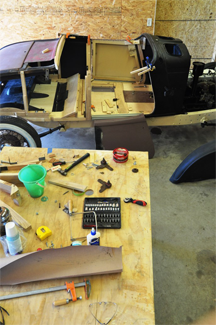 Ken Squier’s Plymouth came to him in parts and had spent many years in the garage of former owner Stewart Raydell of Williamstown, VT. Ken is very fast to say that he has had very little to do with working on the project. His step son-in-law, Sandy Thompson, has taken on all the wood related work between his obligations at his business building staircases and handrails at his company in Stowe. Most of the wood is ash and it appears Sandy has done a better job than the 1932 factory workers. The mechanical work is being done by Gary Scott of East Barre.

Gary has his own garage business and has a long history of working on Ken’s projects. Mr. Raydell’s neighbor, Steve Stephenson, remembers the car and told Wheel Tracks that he was the person who rebuilt the engine some 15 years age. At one time not too long ago there was a plan to have the car completed for the 2014 Stowe Car Meet this August but they all agree it might now be the 2015 meet instead. They have a ways to go yet.

Ken Squier has a ‘bit’ of a history of being around cars and got started when he was 12 announcing sport events on his dad’s Waterbury radio station, WDEV. He was well known for his skill announcing live play-by-play dirt track races in Vermont during his younger years. His early Vermont announcing booth was an old logging truck. In fact he became so involved that he was able to convince NASCAR and CBS to get together and then basically created an announcing job for himself with CBS for many years.

He announced every Daytona 500 race from 1979 to 1997 using his ’special style’. He often described NASCAR drivers in his era as “common men doing uncommon things” and describing wrecks as “side over side, end over end” for flips and for calling wrecked racecars with the phrase “all torn up”. A battle for position involving a large pack of cars would periodically be referred to as “an Oklahoma land rush.” Ken is still very active in the sport today.