“Cadet” is its name and Buick is its brand! 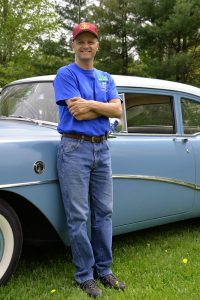 Cadet, our 1955 Buick Special.
The name comes from the cadet blue metallic paint applied, by GM 60+ years ago
and the fact that the Special was the entry level Buick, at that time. Not sure why I settled on Buicks other than the fact the old advertising campaigns indicated they were “Just Better”. I think I had my sights on a 30’s or 40’s Buick, but found most needed much more work than I was willing to do or closer to the truth, capable of doing. I’m happy I decided on the 55’ because I think the styling is very iconic of a relatively happy time in America history and although lacking power steering, power brakes, and seat belts, I consider the car a reliable modern car.

Cadet joined our family in April of 2012 after surfing a copy of the publication “Uncle Hennery’s” out of Maine. The on-line pictures of the car looked great and deserved a closer look. After seeing the car and a short test drive, I was hooked and made a deal on the spot. I returned 2 weeks later with Vermont plates in hand, checked the fluids, kicked the tires, and began the 200 mile drive home. For the first 10 miles, I was all smiles. But after stopping for gas and a snack, the car would not restart. It was ready to start and wanted to, but the new operator (me) didn’t know how to engage the starter switch. Turns out those clever engineers at Buick had incorporated the starter switch into the accelerator pedal. It’s been fun watching others fall into the same trap since.

Cadet originally came from Glenn Buick in New Kensington, Pennsylvania. After going through paperwork that came with the car, I estimate I’m the 5th owner. The first owner was a banker from Sharon, Pennsylvania and the car still hasa draw string bank deposit bag from Sharon Savings and Loan in the trunk that contains assorted old wrenches. I think the 2nd owner had kept the car the longest (29 years) and put very few miles on it. The 3rd owner was an auto broker and took no interest in the car other than it being inventory. The 4th owner is an over the road truck driver and after purchase, brought the car to Maine. After owning it for 5 years, he could never find time to drive it, so he let me buy it and bring it to Vermont. At this time the odometer reads 29,850 miles. An oil change sticker on the door jamb indicates 21,033 miles had been logged by 1968.

Since I’ve owned the car, I’ve rebuilt the carburetor, combination fuel pump / vacuum pump, replaced the water pump, heater hoses (all 23feet), all flexible break lines, both front break cylinders, and front shocks. With the exception of an attempt at restoring the engine bay by one of the previous owners and touch up on the rest of the cars exterior, it’s all original paint. Even though primmer is showing in many places, there is no plan to repaint the car. The cars interior is original as well. The car drives very well and with the 264 cu. in. nail-head V8, Cadet has no problem cruising at interstate speeds (and beyond). 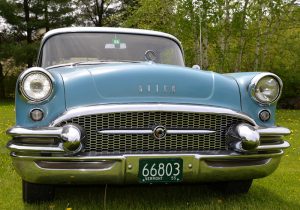 Last July (2016), our family took Cadet back to Pennsylvania (Allentown especially), for the Buick Club of America’s nation car meet. The annual week-long event was the BCA’s 50th anniversary and was held at an amazing venue. Italian jewelry and luxury goods designer Nicola Bulgari hosted the event at his complex in Allentown. A converted 21 acre drive-in theater complete with a test track and still functional movie screen. Mr. Bulgari has enjoyed a fascination with American automobiles since he was a small child growing up in Italy. He recognized the design and engineering of American cars to be far superior to anything else on the road at the time. Between his Italian and Allentown addresses, he houses over 210 antique automobiles. Although all beautiful to my eye, he considers them to be daily drives and all are registered and driven often. One hanger sized building on his compound, housed nearly 40 Buicks ranging from the early 1920’s to the 1990’s, but lacked a 1955? Through Mr. Bulgari’s generosity, he has been able to secure funds to help sustain the “America on Wheels” transportation museum in Allentown. While on the PA. trip, the 90° days were challenging for me behind the wheel (Dana and Jason had A/C in the Reatta), but the Cadet took the city traffic in stride.

The car is certainly a keeper and although it won’t chirp the ties and the paint has lost most of its shine, we’ll let the stately Cadet gracefully fade into old age as it puts smiles on the young and brings tears to the old as it passes by.