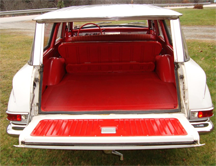 Many vintage car collectors tend to migrate to the cars that were special to us in the past… the cars we grew up with or that have special meaning like your honeymoon car or the one you learned to drive on. Our ’63 Valiant 200 station wagon falls into that category to a small extent, but not entirely.

I’ve always had a love affair with the A body Valiants from 1960 through 1966. My Dad had a 1960 Valiant that was a very interesting car with many new features. It was Chryslers first “compact” introduced in 1960, along with the Ford Falcon from Ford and the Corvair from Chevrolet. But the Valiant was different. It had very distinctive styling, a slant 6 engine and an alternator replacing the generator. I enjoyed driving that car very much. It was relatively quick and with it’s torsion bar suspension handled like a dream.

Fast forward to 1968 and the need for a second car to support a growing family. As a Mopar family the choice was a ’65 Valiant wagon secured from a used car dealer on North Ave. in Burlington. I loved everything about that car. It was the right size, reliable, easy to care for and fun to drive with stick shift and it’s peppy Slant Six. I never forgot that little wagon and over the years kept an eye out for another from the ’63 to ’66 body style era. Mostly what I found were either butchered into Rat Rods or rust buckets or both. Many of these wagons were produced but most were family haulers that paid their dues over the years. I was casually surfing the internet in 2010 and lo and behold up pops an original, low mileage, rust free, stick shift, top of the line 1963 Valiant wagon… and close to home, no less located in Nyack, N.Y. Three days later and we were headed south to check out the car. She was everything I’d dreamed of. Mint bright red original interior with a rust free body in white and a smooth running 170 ci engine only 41,000 original miles. The car was being sold through a broker. We took her out for a test drive around the local neighborhood and everything checked out. A few days later and the deal was struck. Our test drive had only been on local streets around Nyack but now it was time to drive her 300 plus miles on 20 year old tires. The shortest route was up the NYS Thruway, then the Northway to Lake George and onto mostly two lane roads to Vermont. My safety net was that my two brothers, both from Long Island, were planning a visit to Vermont and agreed to follow me home just in case. Valiant reliability and comfort came through and the trip back to home was a dream. Despite the intervening 47 years it’s amazing how easy it is to flashback to the 60’s ! The trip home was uneventful except for a blown 20 year old tire valve on I-89 just before the South Barre exit. Luckily the spare had air.

Very little work has been done to “Val” as she is named [ not very original but it fits ! ]. There was a tune up and new shocks. I expected trouble freeing the old shock bolts but after a little PB Blaster they spun right off. Then there was this oddity. The original radiator had a small “V” cut out of the radiator neck, enough so that the cap would not lock down. Here is one of the things I love about these cars. It took 15 minutes to remove the radiator for repair. Remove two hoses and 4 bolts and out she came. I’ve tried to trace Val’s history without much luck. Papers stuffed in the glove compartment indicate she was sold new by a Wisconsin Chrysler / Plymouth dealer and later spent time in Minnesota. This adds even more mystery to the car as there is absolutely no rust anywhere on the original body despite her snow belt beginnings. If only she could talk!

Station wagons of the 50’s and 60’s era were in their glory days. They were family work horses but not very sexy compared to the other options of the day like tri colored hardtops and convertibles of the 50’s and Mustangs, Corvettes and Barracudas of the 60’s. But I’ve learned first hand that they’ve endeared themselves to those who grew up with them. Two cases in point. At the WPC National Meet in St. Johnsbury a couple of years ago I had Val parked next to our ’65 Barracuda Formula S. The “Cuda” is a really nice car, but the Wagon got most of the attention. At the Stowe Show last August I had Val parked next to our ’64 Valiant convertible, also a very nice mostly original in red but it was the wagon most folks migrated to with tales of the Valiant wagons they grew up with.

I love Val… she embodies everything I like about the ’60’s A body Valiants. She’s reliable, easy to work on, kind of funky in her own way and always brings happy memories to those who meet her. Other cars will come and go but Val is a keeper. 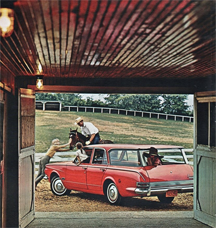 Editor’s note… To the left is a Plymouth sales ad from 1963. The ad discussed the many factory tests performed before release to the public. It read:

“Hour after hour, hour after hour, the car was driven in the white-hot heat of the Arizona desert. They were driven 50,000 miles at top speed over all kinds of road surfaces– some 10 times the strain any ordinary car would ever have to withstand.

Horns were blown 58,432 times, turn signals checked 241,032 times and trunk lids opened and slammed 3,652 times. In all, our prototypes went through, beg pardon, hell and high water, but it was worth it to us and, more importantly, to you.

We uncovered 358 design flaws. Not just fixed or corrected, mind you, but improved– back to the drawing board– redesigned, rebuilt, retested, until the result was right. This we did in spades. Get on and start a great adventure story all your own.”