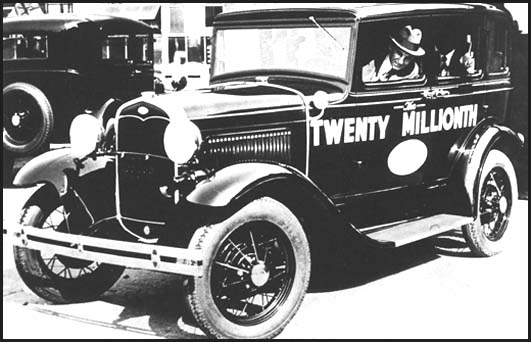 Henry Ford started his working life as an engineer with the Edison Lighting Company Detroit, in 1884. Ford by chance, came across a science journal written by Nicholas Otto, a German engineer who was developing the internal combustion engine. Ford became very interested, some say infatuated, and he decided to build his own.

He soon got to work, building and developing a car in his spare time in a small shed in his garden. His car, the “Thin Lizzie” was completed in 1896. Ford was now desperate to start his own motor company; by 1899 he had secured enough investors to begin a production run. Initially his first attempts were unsuccessful, he failed to produce a car that could be sold.

Eventually however, Ford produced the Model A, sales were good, by 1908 profits soared to over one million dollars. In 1909 Ford decided to concentrate production on the Model T, he wanted to mass produce this car, and build each unit in the shortest time possible, and as inexpensively as could be achieved. By improving his production methods he went on to build each car in just 90 minutes, and at a price of less than four hundred dollars his competitors were left floundering.

His famous “you can have it in any color you want, as long as it is black” arose because black paint, was the only color available in America that was quick drying. By 1926 Ford had sold over fourteen million Model T cars. On April 21, 1931 they reached twenty million.

The Ford GT40 was a product of the merged interest of Ford USA and Lola Cars, for one aim – to win the Le Mans 24 hr race. Ford after having their bid for Ferrari turned down, set to work on the GT40. Unsuccessful at first, Ford then handed over control to Carroll Shelby. Eventually, Ford in 1966 gained their greatest ambition and won Le Mans. Ford then went on to dominate the race for the next few years, with four successive victories in total.

The Ford Mustang is one of the great American success stories, a sporty design which appealed to all and caught the spirit of the times perfectly when it was launched in 1964.