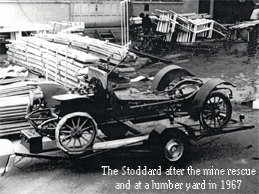 The Stoddard-Dayton Motor Car Company started out, as many early auto manufactures did, as a farm implement company in 1875 originating in Dayton, Ohio. As the automobile craze grew in the 1890’s, John and Charles Stoddard caught the fever and by 1904, with the help of a young English engineer, H.J. Edwards, launched their pilot model with a 4 cyl. Rutenber engine. Stoddards were a well-built automobile and soon orders outpaced production.

Unfortunately, in 1910, Stoddard made the fatal mistake of joining the automobile conglomerate of Benjamin Briscoe’s United States Motors, an eventual failed attempt to compete with Willy Durant’s General Motors. By 1913, the high-end Stoddard was dropped from the line and only Maxwell remained. Today, there are approximately 30 Stoddards known to exist and only 3 Stoddard Roadster 10H’s.

For the 1910 production year there were 3 different engines; 30, 40 and 50 HP, and 8 body styles; roadster, baby tonneau, coupe, touring, torpedo, landaulet*, limousine and town car. This Stoddard Roadster 10H has a 3 7/8” x 4 ½“ hemispherical combustion 4 cyl engine developing 30+ HP. The valves are 2”, each pair operated by a unique single rocker arm on top of the cylinder jugs, resembling a walking-beam steam engine when in operation. It has a true twin ignition using a Bosch magneto, Connecticut coils and 8 spark plugs. It sold new for $1500, compared to a Model T at the time for about $800.

The history behind this car is that it was discovered in an abandoned mine property in the West around 1940 and being recognized as a quality early automobile, was spared from the scrap drive of WWII. It passed through several hands until it ended up with the infamous antique car dealer, Art Burrichter in 1967. A collector from Pa. purchased it, and then sold it to his son 2 years lat-er. The son spent the next 9 years scavenging for parts and fabricating the ones he couldn’t find. Fortunately, in 1970, a sister Stoddard 10H was unearthed in upstate New York, so any needed patterns became available. In 1978, the restoration was completed and the Stoddard was taken to Hershey where it was awarded a National 1st Prize. Having only been driven a few times around the block, it was sold to another collector in Pa. who had seen it at Hershey. Apparently this gentleman took the car out once and had a carburetor backfire which scorched the side of the hood. After re-painting part of the hood, he parked it, and the car languished in a corner of his barn for the next 32 years. When the owner died, his family started slowly selling off his automobile collection and this is when I got wind of the Stoddard. Fortunately, one buyer was dealing with the family quietly and fairly, so the word never got out about the sale of these vehicles, or even the existence of this Stoddard. After a couple of years of patiently waiting, the family finally agreed to sell the car and I wasted no time.

After getting it back to Vt., I started calling all the Stoddard collectors to find out more about the car. To my amazement everyone had lost contact with this car and wondered what had ever become of it. I feel very fortunate indeed to have been in the right place at the right time. Presently, the engine is out and apart, aluminum pistons ordered, the transmission mounts modified to handle the twisting, the shifter shaft and transmission re-aligned, the clutch relined, the rear end adjusted, etc. I felt the 7” headlights were too small, so I set about procuring the 10” Gray and Davis ones on it now. I pounded out the dents and converted them to the early magnifier-type headlights by taking the lenses out of a couple of magnifying glasses and making the brass bezels and tri-pod supports to hold them in place. The convex lenses are from a clock-parts supplier in Oregon. A little buffing, and “Voila”, new headlights. And so, as you know, on and on it goes!