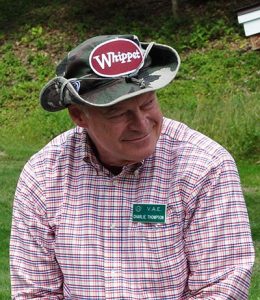 Since I always liked old cars and my Dad had told me about Whippets, I went to check it out. The owner was moving and didn’t want to move the car, which was not running at the time. He had bought the car for $300 “downcountry” and wanted to recover his investment. Marion and I had just gotten married, I was still a student at the University of Vermont, and I didn’t have two nickels to rub together, so I offered him $50. He was appropriately insulted by my offer and turned it down, of course. Then on moving day, he called and said that I could come get the car for $100. My brother and I rushed to get the car and found the owner and his belongings gone and the Whippet sitting on the lawn. We towed it to my place in South Hero, VT, sent a check, and never heard from the owner again. 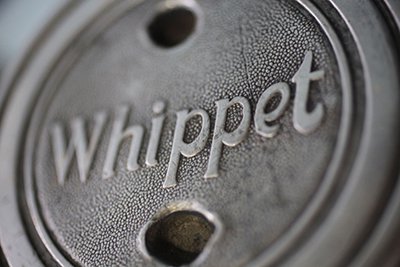 The Whippet was pretty much complete, but had had a rough life. It had been wrecked a couple times and had dents and rust with running boards replaced with old rough lumber. The top had been improperly replaced and water had rotted most of the wood around the top and door posts. Water and mice had totally destroyed the rear seat. But…with a little gas in the vacuum tank and a push around the yard with my brother’s car, it RAN! It burned oil like crazy, but ran all the same.

I didn’t do much with the Whippet for many years, busy with a young family and an old house. Around 1990 I installed a new set of rings and cured the oil burning. Then, in 1999, I installed a new top, and I drove it 500+ miles to Lamar, PA*, to collect the Long Distance Award*, given by the WOKR for driving the longest distance to our International Meet. In 2001, I reupholstered the rear seat and then drove it 800+ miles to Napoleon, OH*, collecting the Long Distance Award* a second time. A rod bearing failed after this trip, so I shipped the engine off for a Florida vacation to be rebuilt by one of our Whippet experts. Next came Nashville, TN* in 2005, Marshall, MI* in 2008, Flatrock, NC* in 2009, Bellefontaine, OH in 2010, Duluth, MN in 2012, Waynesboro, VA* in 2013, and N. Conway, NH* in 2015 winning four more Long Distance Awards* for a total of six. All trips were unescorted except Duluth when my friend drove his 1912 100-year-old Overland with me. Luckily this was the only trip which had a problem (other than flat tires and a plugged carb) when a fan belt broke and we backtracked 12 miles in the Overland to buy a new one. I have driven Rosie over 30,000 miles over the years with the only non-routine maintenance being the engine rebuild and new valves last year.

She is Rosie, named after Rosinante, Don Quixote’s old broken down horse and John Steinbeck’s camper pickup in his book Travels with Charlie. 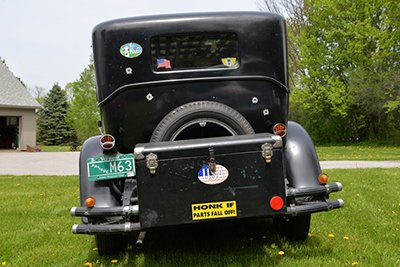 What I remember most on my trips is the friendly and kind people I’ve met along the way. While touring Penns Cave, one tire went flat in the parking lot. By the time I got out of the cave tour, fellow club members had put on the spare. The tube, which I had never removed in 32 years of owning the car, had 4 patches already!

Somewhere near Ottawa, Canada, I had stopped under a street-side shade tree to take a break. The lady from a nearby house came out and invited me in for very welcome milk and cookies.

In Brussels, Ontario, I stopped at the home of Charlie Proctor, a fellow Whippet owner, but no one was home. Backtracking a ways to a Proctor mailbox I had passed, I met Charlie’s niece and her children. She told me the Proctors had already left for the meet in Michigan. I went to camp on Charlie’s lawn and his niece invited me back in the morning for breakfast and for use of her bathroom.

On my return, I had lost my way and found myself in the middle of Flint, MI. When I stopped on a side street for a break, two children ran into their house and returned with their father. He invited me in and, using Mapquest on his computer, helped to plot a route to get me back on track. A bit later at the 6 lane Port Huron border crossing back into Canada, Rosie overheated and stalled at the customs booth. After the usual and some not-so-usual questions, the agent told me to stay where I was despite angry travelers behind me. He make a call and 3 burley bridge workers in safety green shirts came to push Rosie to their maintenance area to cool while custom officials stopped traffic in several of the lanes to let us cross.

Traveling through Virginia, while tinkering on the generator in a shopping parking lot, Paul and Weeta Phillips came over to investigate the car and offer to help. They were collectors of scooters, pedal cars and old bicycles. They left me with their phone numbers and an offer to come back with further help and/or to put me up overnight with dinner and breakfast!

On Route 209 in Pennsylvania, I had just passed Muchmore’s Antique Shop when I realized that Rosy had boiled out all her water and was overheating. At her shop, Dorenda Muchmore let me fill the radiator, refill my gallon jugs, and provided me with another gallon container for the road as well as wonderful conversation and a tour of her shop.

Later in the day, after negotiating a mountainous detour off Route 209, I stopped on the edge of a driveway to check the radiator and let Ro-sie cool off. Bill the homeowner’s, second question was, “Want a beer?” I told him about my leaking water pump and he just happened to be an old-time plumber with a spool of graphite string valve packing in his box, getting me back on the road toward home.

Returning home in the rain through northern NY, I failed to pay attention to mileage and ran out of gas. A lady stopped and went miles ahead to bring me gas if she could find a container. While waiting a man stopped, drove me to his shop to fetch a 5 gallon can, then to a gas station and back to the car. My first rescuer had returned with a gallon window washer container filled with gas. The 5 gallons went in the tank while the 1 gallon was used to prime the vacuum tank.

With all the bad news we hear these days, it is nice to find kind and generous folks everywhere along my travels