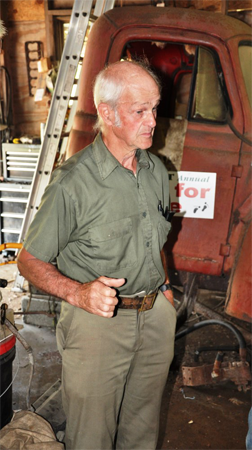 What do we do when we decide it is time to downsize our collection? How do we even get started? We might decide we want to move where the snow doesn’t fly or that we simply want less to deal with. What ever the reason, the collection that seemed to have accumulated very easily and some might say ‘over-night’ can be a very daunting task when you are looking to scale down.

AND then there are those ‘items’ you would NEVER part with….it can get complicated!

Stanley Lasell (pictured) of Williamstowm, Vermont wants to down-size. He started by asking some VAE members for help in deciding what parts of his collection should simply go to the crusher and some advice of value of what is left. Asking VAE members what should go to the crusher, it turns out, is a very simple answer….”Nothing”. We are just not built that way.

Stan did get a visit by three of us with price books in hand and we hope we have helped him a little.

This month’s WT will feature Stans collection and maybe force us to think about our collection in a different way.

Wheel Tracks might just open other discussions with help on the subject.

Stan’s first call was to the Wheel Tracks editor, Gary Fiske. He was trying to figure out how to down-size. I told him I have a lot of short comings when it comes to pricing old cars but I know two folks who could be of help. So, Gary Olney and Wendell Noble were invited to make the trip to Williamstown and Stan’s home. I had my note pad and camera…and I am sure we impressed the socks off Stan when we arrived. He is one of those “not-very-old Vermonters” who comes with down to earth common sense and the speech to go with it. “Bye and bye” was a favorite of his, I haven’t heard that said to me face to face since being with my grandfather in the 50s. Another regular comment was that Stan was going to “live forever….as long as he lives”. When he was describing the distance to his third car-yard….it was “ a loud holler from the barn”. Many of his treasures were “not for sale….but maybe”. We were up in Stan’s 2nd car-yard when Wendell asked him “What’s that over there”. Stan’s reply was “I was wondering that myself”.

Most of Stan’s treasures were in high grass and among tress but as we get into the Fall his collection will be much easier to see.

Here are a few of his vehicles he would like to sell. If we do not have room for all the pictures there will be a complete list for you to work with. 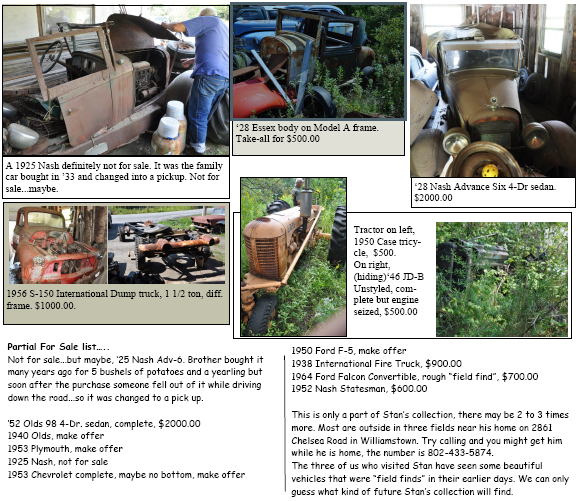