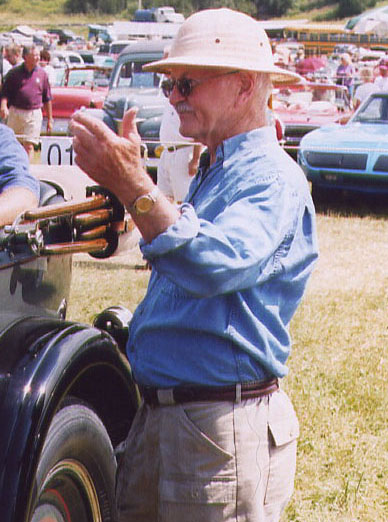 Adding to our roster of Vermont Automobile Enthusiasts, this month the “BIG E” goes to someone who is already a “Hall” of Famer… R. Avery Hall. When you stop and think about it for a minute there are few who have devoted as much time and effort to the VAE as Avery. In addition to his club contributions, he has also managed to pretty well preserve several worthy vehicles.

His work is an inspiration for us all and having a national prizewinner at many of our meets is a big plus for members, guests and the hobby. None of this happened overnight. R. Avery (think “our” Avery) has had the bug for some time. Although he now tends to deny it, there is evidence in the 40th anniversary publication of an early interest… Avery appears in print in a Model A Roadster.

He denies a Ford-inspired old car career but we know better… Ford has always outsold Packard, Avery and look what a used Model A has done for you! This writer remembers Avery first attending VAE meets in 1954 at the Lincoln Inn in Essex Junction… often in the inspiring company of John (Hawkeye before Alan Alda) Hawkinson. Avery had a military crew cut, wore a black sweater and smoked a curved-stem pipe. Sort of a cross between Marlon Brando and Albert Einstein. John Hawkinson was revered as an auto guru and drove the cars to prove it. Avery was his quiet and wise sidekick. Time has confirmed the wise part. I wonder what happened to the quiet?

Avery grew up in the Charlotte / Burlington area and has long-term connections here. As a younger enthusiast he drove his “old car” as daily transportation. I remember running across Avery in the ’28 Packard sedan on a back road somewhere in south-central Chittenden county as he was transporting folding metal chairs… the Packard was stuffed with them… off to a church supper or wake somewhere. Always the organized and helping volunteer.

As I saw more of Avery, and Mahlon Teachout joined our car interest group, we had some interesting times together. Avery told us one time about moving back to Vermont with the family vehicle (think old Packard). The weather was very warm and Avery had questionable tires. Always the engineer, Avery told us that out on the highway in the daytime (it was cooler at night but then there was the issue of headlights), he always tried to drive so as to keep at least 2 of the tires on the white line.

He reasoned that the highway temperature would be lower on the reflective white line and that would be easier on the tires. Fortunately for all involved he made it back and has stayed to become VAE President, Board Chairman, Director and Meet Co-chair of major events at Essex and Shelburne.

Avery has raised money, written advertising, represented us to the media, judged, and attended hundreds of meetings. In odd moments he has operated Avery’s Garage, taken driving courses, attended technical schools for engine rebuilding, and produced some really nice restorations.

He has an additional interest in old boats and I saw him looking with considerable interest at an old airplane at Basin Harbor awhile back… and then there are sports cars. We have many great Enthusiasts in our VAE but few have proved it like “Our” Avery. A big collective thank you comes with this “BIG E” award.