Fifty years can generate quite a lot of history but like any history there are defining moments. As the VAE reflects on our past 50 years there have been a number of things and people that have shaped our direction and progress. We have mentioned several of these people here in Wheel Tracks during out golden anniversary… all true great Enthusiasts. This month’s task is harder than usual because of the size and scope of the subject.

We wish to recognize our “Canadian Connection” and the help and support we received from our Northern friends in our beginning and as they continue to be a big part of our major car shows.

Thanks to one and all of you enthusiasts. That said and meant, history reveals that there were a group of really outstanding Canadians who contributed to the VAE very early on. They showed us how to organize our fledgling Stowe car show and what to do to attract participants and the public. They taught us about classes and judging and lent a general sophistication that we might have never developed without them. 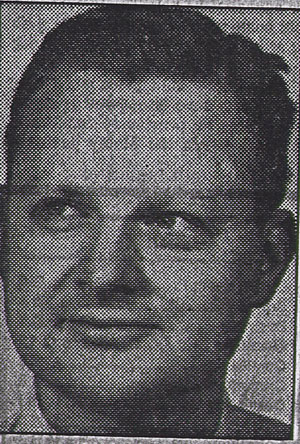 It is the latter that gets this month’s Big E Award, however. Hugh Durnford got a lot of hands-on car club experience as a founding member of the Vintage Automobile Club of Montreal and was eager to help out the new Vermont car club, the VAE. At the time his “driver” was a ’29 Packard roadster and the project was an early Dodge Brothers touring car. There was also a Kissel Gold Bug 1923 and a 1919 McLaughlin (think Buick) in the wings. Hugh went on to become the authority on McLaughlin. (VAE member Ray Unsworth has one of these sturdy cars.) At the age of 12 Hugh wrote an essay on Vintage cars; at 16 he owned his first example.

He co-authored the book “Cars of Canada” and made many major contributions to the hobby. Hugh’s death at 48 in 1979 was a shock. The old car hobby in both the US and Canada owe Hugh a lot… but the VAE and its members owe him even more. Recognizing Hugh Durnford with our Big E is little and it’s late but it’s truly deserved.

Hugh Durnford, managing editor of the book department of the Reader’s Digest Association (Canada) and for 20 years, a Montreal Star reporter, writer and editor, died suddenly Friday at the Montreal General Hospital. He was 48.

Hugh Mckenzie Elliott Durnford was born in Montreal in 1931, the son of Col. And Mrs. Elliott Durnford. He was educated at St. George’s School, Trinity College School in Port Hope, Ontario and McGill University, where he graduated in 1953.

Hugh served the Star in various capacities from 1954 to 1974 and then joined the Digest as a book editor. An ardent lover of Canada, he took special delight in heading the team that over a two year period produced Heritage of Canada, a popular history that was subsequently published in French as Heritage du Canada.

Mr. Durnford was a founding member and former president of the Vintage Automobile Club of Montreal and for years edited its magazine, Le Chauffeur.

He is survived by his wife Nancy, three daughters, Sally, Megan and Kendra, his mother, Mrs. Amy Durnford and a sister, Mrs. Jacis Stead, all of Montreal.

Funeral service will be at 2pm Tuesday at St. George’s Anglican Church, thence to the Mount Royal Crematorium. 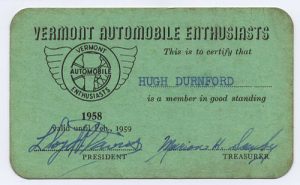 It is interesting to note that both Lloyd Davis (VAE President in 1958) and Marion Saxby (Treasurer in the same year) who signed Hugh’s membership card for that year, are also both “Big E” award laureates. Hugh was in good company when he joined us in 1958. Ron Pickering with some help from Graham Gould and Hugh Durnford’s widow, Nancy, have agreed to work on an additional article about our Canadian Connection. Look for this interesting history in upcoming Wheel Tracks issues. If you have anecdotes or information about our Canadian friends, the VACM, or events we shared, please send them along to Ron, Ellen Emerson or Gale Boardman. We’d love to share the information. And look for another “Big E” (for super enthusiasm) in next month’s newsletter.