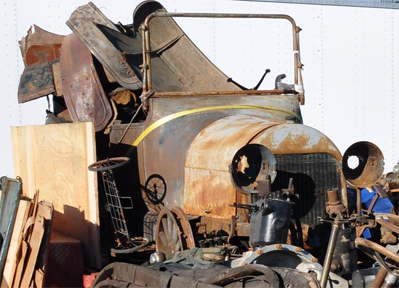 Vin Cassidy, the tale is told, purchased this 1915 Buick Tourer in Iowa last year (2011) but did not have the room to haul it back to his home-base in Rowley, Massachusetts. Vin and his family operate Cassidy Brothers Forge in Rowley where some very beautiful architectural wrought iron is manufactured. Along with running the sales department, Vin also buys and sells vintage auto parts throughout the U.S. If you are ever in his neighbor-hood you really need to stop by and tour the many garages and containers of old car parts in the rear of the forge business. Many VAE members have bought some of Vin’s treasures at surprisingly low prices.
Now back to the tale and travels of Vin’s Buick…. Earlier this year Vin returned to Iowa and hauled his Buick home. Then in August, deep inside of our Stowe Car Show vendor area we could all hear an engine cough a couple of times then take off with a bang or two. It was Vin’s 1915 Buick looking about what it looks like in the picture to the left. Someone could be seen stand on the trailer feeding fuel to the engine and working the carbure-tor….Vins Buick had arrived in Stowe! No one at the show was interested in buying the car so Vin hauled it back home. During the return trip one of the doors fell off requiring Vin to back-track to Stowe looking for it. This reporter forgot to ask Vin if he found it so you can ask when you see him next. 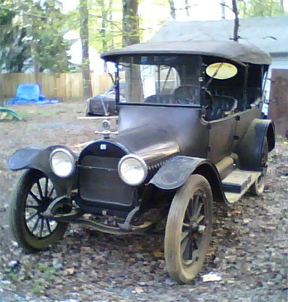 Fast-forward to the Fall Hershey Car Show…. And guess what is making it’s appearance? ….The 1915 Buick sitting rather lost on it’s trailer! About the second day of the show some ‘higher old-car power’ kicked in and yup you guessed it…a person from Iowa appeared and was interested in buying the Buick. It is told the Buick is now residing in Forest City, Iowa with a possible bright future.

Buick made around 42,000 cars in 1915, 19,080 of them were touring cars like Vin’s and the car pictured to the right. They were also still making carriages in 1915, in fact a completed carriage would come out of their factory every ten minutes, some 25,000 each year. The company started around 1850 as McLaughlin Carriage Company not far from Oshawa, Ontario and made it’s first automobile in 1907. In the beginning the cars were known as “McLaughlins”. Later the name changed to “Mclaughlin-Buick” then became simply “Buick” when the company became General Motors of Canada in 1915. Interestingly, until 1914 the cars were finished with the same paints and varnishes the company used on their carriages…some fifteen coats on every car.