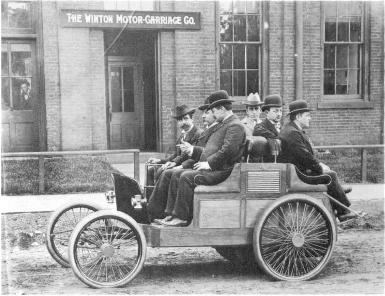 In October 1896, Alexander Winton, of Cleveland, (who is described as “a short-tempered Scotsman”) announced his first Automobile in “The Horseless Age” magazine. His machine weighed in at over 1000 pounds, which slowed its performance. A second Winton was introduced in February of 1897, and the Winton Motor Carriage Company was incorporated in March. The second Winton was longer and wider, accommodating three people across each of its two seats, the second seat facing rearward in what the French called the dos-a-dos (back to back) arrangement. (See picture.)

Leo Melanowski, Winton’s Chief Engineer invited Henry Ford to come to Cleveland for an interview at the Winton Company. Alexander Winton was not impressed with Henry and decided not to hire him. Henry went back to Detroit to continue working on his second Quadricycle. The Winton Company recorded its first sale in March of 1898 for $1000 dollars and by years end, 22 Winton’s were sold.

Winton was the first to use a steering wheel instead of a tiller; he put the engine in front of the driver instead of under the car; and he developed the first practical storage battery. He is perhaps best known now for the effect he had on others. James W. Packard, a maker of electrical products (whose firm later became the Packard Cable division of General Motors) visited Winton’s office in Cleveland to offer a few suggestions for improving Winton’s car. Winton blew his top and said: “If you don’t like the car, why don’t you build your own?”

By 1899, more than 100 Winton’s had been delivered, making Winton’s the largest manufacturer of gasoline powered autos in the United States. With the Winton starting to show a fair amount of success, the first auto dealership in the United States was opened in Reading, Pennsylvania by H.W. Koler.