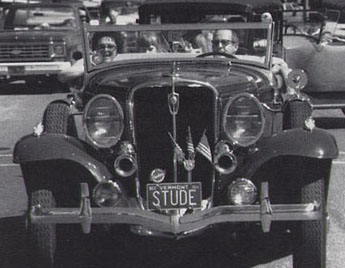 This month’s big “E” award goes to Willis Spaulding with kudos to wife and grandmother Shirley. Grandson Matt is also a budding Vermont Auto Enthusiast, obviously mentored by Willis. This writer tricked Willis into providing some personal history for our pending 50th Anniversary Book… it appears below in his own words. Thanks Willis.

“I learned to drive on the farm in a Model T. I have always been a “car lover”. I learned of a local car club and decided to go to a get-together. I was surprised at the number of members that I knew. We, my wife and I, joined VAE in the early fifties, probably 1954. We decided that we needed an old car. Pev Peake had a 1926 Studebaker Standard Six Coach for sale. Our regular car was a Studebaker so it seemed like a good choice.

Our meets were very informal picnics, tailgate parties, etc. We saw pictures and films from our prior meets. One car that I couldn’t get out of my mind was Jim McLaughlin’s 1930 Studebaker Tourer. I asked Jim about selling it but it wasn’t for sale. About this time, Cena Galbraith and I became editors for Wheel Tracks. It was then a 1 page mimeographed copy. We put it out quite regularly. It was printed at no expense! How? At this point and time our club was so poor that we had to take up a collection to have enough money to mail the next meeting notice and copy of the newsletter.

Jim McLaughlin called me out of the blue and said that for X amount of dollars I could have the touring car. We were able to arrange a loan/gift from my parents to finance the car. They were not convinced that it was a great bargain but love is strong. Our family had a number of great times in this car. Most car lovers have to have or think they have to have more than one car. I went with friends to buy literature (shop manuals, etc) and ended up buying the car, another 1930 Studebaker sedan.

Dale Lake had a 1932 Studebaker Convertible Coupe that I had been admiring for some time. Dale said that he planned to restore it. Dale had many cars and was forced to liquidate due to new state laws relative to unfenced cars. He would sell me the convertible but I would also have to take a 1930 Studebaker sedan. A deal was arranged and I had more vehicles. When I towed the convertible home with a 1960 Studebaker Lark Wagon my kids comment was “Mama, did you let him pay money for that?”

We restored the convertible and were awarded the President’s trophy by President Alden Champan. I was honored to be the President of VAE for 1965. We have met many great people, made some great friends and have had many great times. My grandson Matt and I have spent the last few years restoring the 1930 Tourer to show status. We have been fortunate to win awards in VAE and SDC shows. Matthew is now a member of VAE and enjoys going to the meets and judging with me.”

Willis has only touched the surface of his enthusiasm with the above… The year he restored his convertible coupe he tore the end off the porch of his lovely Essex Junction home so as to be able to drive the car into the enclosed porch for winter restoration… and Shirley let him do it. And I can’t resist mentioning that some day when we are all telling stories, Willis, Pev Peake, and I could give you some fascinating history of the first “old car” that Willis mentions, the Studebaker coach. Willis… it’s been a great 49 years with your enthusiasm helping the club. We are counting on you, Shirley and Matt for many more.