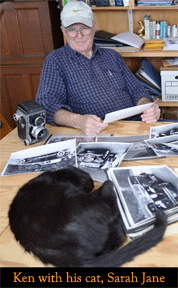 Ken Barber’s title, “VAE Photographer Laureate”, has been decided upon by a committee of One… and that is me.

I believe 100% if you were part of that committee you would agree with me. Photography has been a huge part of Ken’s life and it just so happens old cars and VAE car shows, all the way back to Spruce Peak, has been some of his main subjects.

I had heard about this “photographer gent” from Barton, Vermont but had never met him. Then, I received two photos in the mail one day and a nice note from him giving me permission to use them in Wheel Tracks. Those photos take us back in time to 1917 during a special period in the automobile history (they are on page 2 of the last two issues).

Whenever I visit the NEK (Northeast Kingdom) it is always a treat to me and when I met Ken at the Parson’s Corner Restaurant in Barton a few weeks ago it became a special treat. I know more than got my head in the door when Carmon Brown called me by name and directed me to his table. Carmon is a waitress there and if only I had her ability to remember names and be ‘that happy’; I would have it made. I doubt if it was two minutes after meeting Ken that I knew he had a very special talent and I also knew that he was going to be one of those long time friends I would always learn from.

Ken spent most of his career as a machine operator in an area machine shop. Other than an adventure as a young man when he worked for Douglas Aircraft in California for a short time, he has spent most of his life in the NEK. The camera that you can see at his right elbow was his first real dive into photography, it is a Mamiya twin lens reflex and the “dream camera” in it’s day. The camera led him to a very good fortune one day when he rented a space for a darkroom at a local business. The landlord asked Ken if he would take some boxes off his hands that were in his attic. The boxes had been left behind by a photographer many years before. It turned out to be hundreds of glass negatives from the early 1900s.

Producing photos from those negatives and from the thousands that he has taken with his Mamiya has been Ken’s passion over many years. The bridge pictured to the left is one of his Mamiya photos from the 1960s. Ken said he waited for hours to get that shot. Photographers have a very special way of watching life’s everyday happenings and picking out scenes that you and I would never pick as important… but are very important. That is why Ken Barber is so interesting to talk to and learn from.
Ken has also been struck by the same fever that many VAEers are afflicted with. He says now that he is 86 years old, he seems to be bothered by it less these days. If you have ‘the fever’, you are required to seek out and drag home any object that even looks like a gas powered vehicle… even diesel powered will do. I remember asking Ken when we first met if he had brought any old cars home, in his days. I got the impression there had not been many. As the conversation went on and a second visit to his home plus a few phone conversations, I have determined there have been many “barn-finds” in his life…

I have seen pictures of piles of steel “basket-cases” on his trailer, only his explanation allowed me to see that it was, in fact, a car of some sort. There was a picture of a collapsed barn with a vehicle hiding in it’s shadows. Ken dug that car out and if I have correct notes, he drove that car for a number of years. Another hint that revealed his true identity was the folks he has kept company with over the years. Gael Boardman, Dave Maunsell, Gary Olney, A.K. Miller and Pevy Peake… I needed to hear no more.

Ken is flying to Arizona to visit his brother soon and speaks about his friend wanting to go on a balloon ride while out there. I challenged him (sort of) to doing the ride also, I will ask when he returns to the NEK. What photographer worth his salt would turn down a new adventure…