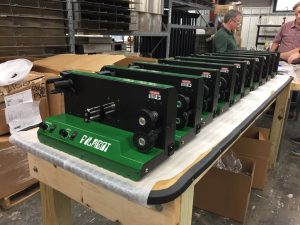 It’s very common these days to wring our hands over the fact that the younger generation has little interest or motivation beyond their smart phones and social media. In the VAE, our Golden Wrench Awards are aimed at encouraging young people to move beyond these distractions and focus their interest on science and math.

This month I decided (with a little prodding from Wendell) that it would be a good idea to write about a Milton young man, we have known, who has been recognized for his achievements. He has always been a “tinkerer”. Among many other things in the family garage, he put together a mini-bike, which he briefly rode around town, but it went faster than was wise with the increasing traffic. He came here to see our old cars, in fact. I think he did some work on old cars, as well as, all of his other projects. His name is Tyler McNaney.

After graduating from Milton High School, he attended Vermont Technical College in Randolph, but came up with the idea for a machine to turn recyclable plastic into filaments for use in 3D printers. He calls it “Filabot”, and he left college to start his own business to manufacture and sell his machines. His Filabot business has earned him a “Rising Star” award from Vermont Business Magazine and Best Small Business Award from Central Vermont Economic Development Corporation in 2016. He was named to the Forbes 30 Under 30 list a few months ago.

His team includes Whitney Trudo, Josh Heisler, Ben Holleran and others. I would like to think that we might have had some influence by encouraging him along the way. But I suspect he would have done just fine anyway. Tyler has many more ideas and hopes for future developments and to quote him, he will “Hit the ground running”. It’s gratifying to know that there are young people who have the drive and intelligence that Tyler has shown.

Used by NASA, Dupont, MIT and others all across the globe: Filabot is a plastic company that builds machines for filament extrusion. Our Filabot product line-up is built to convert plastic into filament for use in 3D printers.

Check out our webstore for products and accessories, our blog for updates about Filabot and our customers and feel free to give us a shout with any questions or concerns. Thanks and happy printing!