“Kids, College & Work kept this 1902 Curved Dash Oldsmobile waiting for 28 years… Finally, with a new paint job on its way, it will be finished”. 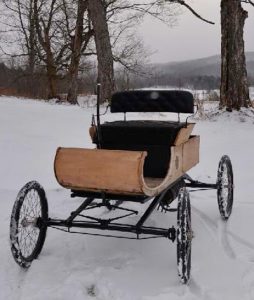 Dennis Dodd purchased the ‘02 Curved Dash Olds in ‘89 from a Massachu-setts gent while at the VAE Stowe Show. It was completely original but needed a lot of work. Over the past 4 years, he rebuilt the engine and along with restoring every other item of the vehicle. A paint booth has been reserved for later in this Spring for the last piece of the restoration. A long time friend of Dennis’s who had earlier built a replica of the same car, has helped in the restoration, he is Skip Minor of Milton. Asked the number of hours spent on the project and Dennis guessed a minimum of 500 hours, not counting his friend’s time.

Gary Hoonsbeen died in 2016 but during his lifetime, he was the country’s lead expert in these unique vehicles. Soon after Dennis brought the car home, he was in contact with Gary, asking all the normal question of a newly minted antique car owner. The big mystery was finding the correct year that this car was manufactured. So as Dennis and Gary went down the list while on the phone, Gary was confirming the vehicle was built in 1901with some parts from 1002. Then came Dennis’s description of the water pump. Gary informed him that he had made a mistake in his notes, because “that” Curved Dash water pump did not exist. It turned out, it did exist, it was the only known original Curved Dash water pump known and it was on this vehicle! The car club later borrowed the water pump to use as patterns to build 15 new ones.

Recently, some officials from the Curved Dash Club made their way to England, where they inspected an original, in a barn that had never been modified. They discovered the serial numbers that have been used for years by the club, to determine the “built year”, most likely has to be changed. The Oldsmobile company had two places where they stamped the built number, on the engine head and on the compression release pedal. Dennis’s number is 6631 and even though Gary Hoonsbeen said the car was mostly a 1901, the serial number was 1902. The England trip will most likely confirm this vehicle is a 1901 car.

This from “Wikipedia” and “The Standard Catalog of American Cars”…….

The gasoline-powered Curved Dash Oldsmobile is credited as being the first mass-produced automobile, meaning that it was built on an assembly line using interchangeable parts. It was introduced by the Oldsmobile company in 1901 and produced through 1907; 425 were produced the first year, 2,500 in 1902, and over 19,000 were built in all. When General Motors assumed operations from Ransom E. Olds on November 12, 1908, GM introduced the Oldsmobile Model 20, which was the 1908 Buick Model 10 with a stretched wheelbase and minor exterior changes.

The Curved Dash car was a runabout model, could seat two passengers, and sold for US$650. While competitive, due to high volume, and priced below the US$850 two-seat Ford Model C “Doctor’s Car”, it was more expensive than the Western 1905 Gale Model A Roadster at US$500. The Black sold for $375, and the Success for US$250.

The flat-mounted, water-cooled, single-cylinder engine, situated at the center of the car, produced 5 HP, relying on a brass gravity feed carburetor. The transmission was a semi-automatic design with two forward speeds and one reverse. The low-speed forward and reverse gear system is a planetary type. The car weighed 850 lbs. and used Concord springs. It had a top speed of 20 mph.

The car’s success was partially by accident in 1901, a fire destroyed a number of other model prototypes before they were approved for production, leaving the Curved Dash the only one intact. 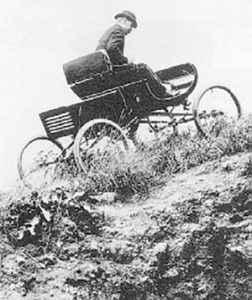 When it inspires a song (below), you know it’s popular. This Olds was the bestselling car in America from 1902 to 1905. Automobiles had an emotional appeal. A driver in 1901 said that controlling a car satisfied “an almost universal sense, the love of power.” Despite the attraction, cars were not a significant player in the transportation world. In 1903, 4000 people bought Oldsmobile’s, but more than 900,000 bought buggies and carriages.

With its one-cylinder engine and horseless carriage looks, the Oldsmobile Curved Dash didn’t seem particularly rugged. Olds Motor Works proved its runabout’s mettle with a number of elaborate stunts. Here the car is driven up a steep hill, over uneven ground. Far more extravagant was Roy D. Chapin’s 820-mile drive, from Detroit to New York, in an Oldsmobile in 1901.

Young Jonnie Steele has an Oldsmobile,
He loves a dear little Girl.
She is the queen of his gas machine,
She has his heart in a whirl.
Now when they go for a spin, you know,
She tries to learn the auto, so,
He lets her steer, while he gets her ear,
And whispers soft and low:

Come away with me Lucile
In my merry Oldsmobile
Down the road of life we’ll fly,
Automobubbling you and I.
To the church we’ll swiftly steal,
Then our wedding bells will peel,
You can go as far as you like with me,
In my Merry Oldsmobile